Déjà Vu: “Peace in Our Time”

Syria's main armed opposition group, the Free Syrian Army (FSA), is losing fighters and capabilities to Jabhat al-Nusra, an Islamist organisation with links to al-Qaida that is emerging as the best-equipped, financed and motivated force fighting Bashar al-Assad's regime. 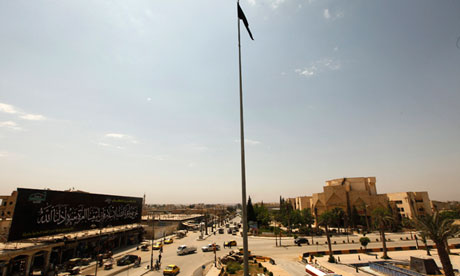 The flag of the Islamist rebel group Jabhat al-Nusra flying over the main square of the city of Raqqa in Syria. Photograph: Reuters

Evidence of the growing strength of al-Nusra, gathered from Guardian interviews with FSA commanders across Syria, underlines the dilemma for the US, Britain and other governments as they ponder the question of arming anti-Assad rebels.
John Kerry, the US secretary of state, said that if negotiations went ahead between the Syrian government and the opposition – as the US and Russia proposed on Tuesday – "then hopefully [arming the Syrian rebels] would not be necessary".
The agreement between Washington and Moscow creates a problem for the UK and France, which have proposed lifting or amending the EU arms embargo on Syria to help anti-Assad forces. The Foreign Office welcomed the agreement as a "potential step forward" but insisted: "Assad and his close associates have lost all legitimacy. They have no place in the future of Syria." Opposition leaders were sceptical about prospects for talks if Assad remained in power.
Illustrating their plight, FSA commanders say that entire units have gone over to al-Nusra while others have lost a quarter or more of their strength to them recently.
"Fighters feel proud to join al-Nusra because that means power and influence," said Abu Ahmed, a former teacher from Deir Hafer who now commands an FSA brigade in the countryside near Aleppo. "Al-Nusra fighters rarely withdraw for shortage of ammunition or fighters and they leave their target only after liberating it," he added. "They compete to carry out martyrdom [suicide] operations."
Abu Ahmed and others say the FSA has lost fighters to al-Nusra in Aleppo, Hama, Idlib and Deir al-Zor and the Damascus region. Ala'a al-Basha, commander of the Sayyida Aisha brigade, warned the FSA chief of staff, General Salim Idriss, about the issue last month. Basha said 3,000 FSA men have joined al-Nusra in the last few months, mainly because of a lack of weapons and ammunition. FSA fighters in the Banias area were threatening to leave because they did not have the firepower to stop the massacre in Bayda, he said.
The FSA's Ahrar al-Shimal brigade joined al-Nusra en masse while the Sufiyan al-Thawri brigade in Idlib lost 65 of its fighters to al-Nusra a few months ago for lack of weapons. According to one estimate the FSA has lost a quarter of all its fighters.
Al-Nusra has members serving undercover with FSA units so they can spot potential recruits, according to Abu Hassan of the FSA's al-Tawhid Lions brigade.
Ideology is another powerful factor. "Fighters are heading to al-Nusra because of its Islamic doctrine, sincerity, good funding and advanced weapons," said Abu Islam of the FSA's al-Tawhid brigade in Aleppo. "My colleague who was fighting with the FSA's Ahrar Suriya asked me: 'I'm fighting with Ahrar Suriya brigade, but I want to know if I get killed in a battle, am I going to be considered as a martyr or not?' It did not take him long to quit FSA and join al-Nusra. He asked for a sniper rifle and got one immediately."
FSA commanders say they have suffered from the sporadic nature of arms supplies. FSA fighter Adham al-Bazi told the Guardian from Hama: "Our main problem is that what we get from abroad is like a tap. Sometimes it's turned on, which means weapons are coming and we are advancing, then, all of a sudden, the tap dries up, and we stop fighting or even pull out of our positions."
The US, which has outlawed al-Nusra as a terrorist group, has hesitated to arm the FSA, while the western and Gulf-backed Syrian Opposition Coalition has tried to assuage concerns by promising strict control over weapons...
Syria's government has capitalised successfully on US and European divisions over the weapons embargo by emphasising the "jihadi narrative" – as it has since the start of largely peaceful protests in March 2011. Assad himself claimed in a recent interview: "There is no FSA, only al-Qaida." Syrian state media has played up the recent pledge of loyalty by Jabhat al-Nusra to al-Qaida in Iraq.
...Jabhat al-Nusra is winning support in Deir al-Zor, according to Abu Hudaifa, another FSA defector. "They are protecting people and helping them financially. Al-Nusra is in control of most of the oil wells in the city." The Jabhat al-Nusra media, with songs about jihad and martyrdom, is extremely influential.
Abu Zeid used to command the FSA's Syria Mujahideen brigade in the Damascus region and led all its 420 fighters to al-Nusra. "Since we joined I and my men are getting everything we need to keep us fighting to liberate Syria and to cover our families' expenses, though fighting with al-Nusra is governed by very strict rules issued by the operations command or foreign fighters," he said. "There is no freedom at all but you do get everything you want." ...
Posted by Steve Lieblich at 8:26 am No comments: Links to this post

From The National (United Arab Emirates), 9 May 2013, by Michael Young, opinion editor of The Daily Star newspaper in Beirut:

There is seemingly no light at the end of Syria's tunnel... The massacres of civilians in two locations last week were particularly alarming, telling us something about the dismal direction of events in the country...
The massacres in the predominantly Sunni city of Baniyas and the nearby town of Bayda came after a relatively rare outbreak of fighting in the coastal region, the stronghold of the Alawite community. The coast is where Alawites may decide to fall back to and set up a mini-state if the regime of President Bashar Al Assad were to flee Damascus.
To grasp just what happened in Baniyas and Bayda, consider the context of the regime's continuing offensive in and around Homs and Qusayr, in conjunction with Lebanon's Hizbollah.
From the start of the fighting, the regime has regarded control over Homs and its surrounding area as a matter of strategic importance.
Homs serves two other vital purposes.
The former Syrian vice president, Abdul Halim Khaddam, a prominent foe of Mr Al Assad, comes from Baniyas, and this may have been an exacerbating factor in the massacre, carried out by pro-regime militias.
If the Alawites ever decide to create a rump state, one of their objectives will be to ensure that Sunnis do not challenge this plan. That means Sunnis must either be terrorised into silence or, in the worst case, forced out of coastal areas. The Baniyas and Bayda killings, while extraordinarily brutal, seemed primarily designed to achieve the first aim. Thousands of Sunnis reportedly left the city in fear, but appeared to be heading toward other coastal cities, namely Tartous, south of Baniyas, and Jableh, to its north.
However, the massacres were a reminder that worse may come, especially if the regime makes headway in Homs and Qusayr, allowing it to seal a major Sunni evacuation route. Sunnis in the north-east increasingly feel isolated from their brethren elsewhere in Syria. That is how the regime wants it. The Sunnis' sense of vulnerability will make them more reluctant to side with the rebellion, and their presence as potential hostages will make Mr Al Assad's enemies think twice before mounting military operations in coastal areas.
This may be the best the Assad regime can hope to achieve, since wholesale ethnic cleansing would be a major endeavour. There is still a significant Sunni population in coastal cities such as Tartous and Latakiya, and in the latter, Sunnis form a majority. Even if they were driven out for some reason, the consequences could be disastrous for the city itself, which would lose not only a large portion of its population, but many of its most dynamic economic actors.
Perhaps Mr Al Assad can learn from his Lebanese Druze antagonist, Walid Jumblatt. In 1983 his community routed Christian militias in the Aley and Shouf mountain districts, expelling most Christians. Victory was complete, but it was also double-edged because the economy of the areas died. This Mr Jumblatt had to seriously consider since his Druze community is small, mostly rural and relatively poor. When the Lebanese war ended in 1990, he organised the return of Christians to the mountains, a natural facet of post-war reconciliation, but also an economic necessity for the Druze.
Sectarian cleansing is traumatic, but it can also be more damaging to the perpetrators than expected. In Bosnia and Kosovo, the Serbs have yet to recover from their reputation as architects of ethnic cleansing, to the extent that the fate of fellow Serbs pushed out from the Krajina district by the Croats in 1995 has been mostly ignored internationally. Syria's Alawites could not forever live in autarky, and appear to realise that it is better to keep Sunnis in a state of fear rather than to carry out a policy of mass eviction that may ultimately turn against the Alawites.
The Israeli attacks against Syria last week were based partly on worries that the Assad regime, if it carves out an Alawite territory, would collaborate with Hizbollah-controlled areas in Lebanon, under the guiding hand of Iran. This could allow for a transfer of advanced Syrian weapons to the Lebanese party, which may use them against Israel.
Moreover, an opening from the Beqaa Valley towards the Syrian coast would permit Hizbollah to be rearmed by Iran during any conflict with Israel if Lebanese ports and Beirut airport were blockaded.
Mr Al Assad has no plans to abandon Damascus. However, we are witnessing a consolidation of the Alawite statehood option as a fallback position. The Syrian conflict is entering a new phase, where long-term territorial plans and alliances are taking shape. And the ensuing violence can only increase as the stakes become higher.
Posted by Steve Lieblich at 8:02 am No comments: Links to this post