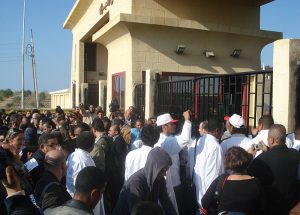 EXECUTIVE SUMMARY: The situation in the Gaza Strip since the 2005 disengagement debunks three fundamental assumptions that have become axiomatic in the Israeli security discourse:


Ever since Israel’s hasty withdrawal from Lebanon in May 2000, it has been axiomatic among Israeli decision-makers that spatial separation between Israelis and Palestinians is a vital Israeli interest, even if not accompanied by a peace agreement. In line with this thinking, Israelis have been repeatedly promised that the implementation of spatial separation, including the removal of Jews from these territories and the construction of a security fence, would reduce daily friction and create a safer and more stable security situation.

Thirteen years after the unilateral disengagement from the Gaza Strip, there is empirical evidence with which to identify the location where a more workable security situation has developed. Is it in the territory where complete separation has been effected, or in the West Bank, where Prime Minister Yitzhak Rabin’s vision of partial separation prevails?

Since Operation Defensive Shield in 2002, the Israeli security forces have been conducting regular counterterrorism activities throughout the West Bank as a matter of course. Generally authorized by the Central Command and the Shin Bet without the need for the approval of the political echelons, this routine activity has given the security forces freedom of action and operational flexibility, which, together with other factors, has ensured relative calm and stability in the West Bank.

Imagine, for example, the launch of kite/balloon firebombs from Jerusalem’s Tzur Baher suburb into the city’s Jewish neighborhoods. The IDF or the Israel Police would send a couple of Jeeps to the neighborhood and neutralize the incident. In stark contrast, the total spatial separation between Gaza and Israel as of the summer 2005 disengagement has denied the IDF freedom of action beyond the border fence. Not that the IDF’s overall capabilities have been reduced, but by transforming the Strip into an ineradicable terror entity that can exact a heavy price from invading Israeli forces, Hamas has succeeded in placing a strategic “price tag” on a wide range of activities short of overall confrontation.

For example, the effectiveness of Israel’s Iron Dome system notwithstanding, Hamas’s rocket/missile arsenal constrains Israel’s daily operational routine as IDF commanders must consider its possible employment in various confrontational scenarios. It is no secret that the balance of costs, risks, and opportunities that accompanies the decision to act in Gaza has become infinitely more complex since the disengagement.

Nor should it be forgotten that a border fence can also benefit Hamas. The fence does indeed help Israel in its effort to prevent hostile infiltration of its territory; but it also enables Hamas to grow stronger and to organize safely under its protective wing. Indeed, under the auspices of the spatial separation, Hamas has managed to build a regular military force comprising battalions and brigades, armed with a large below-ground rocket/missile arsenal and supported by an effective command and control system. None of this would be possible without the full realization of the Israeli leftwing concept of “they are there and we are here.” This is the source of the glaring difference between Hamas’s formidable military position in Gaza and its difficulties in building its strength in the West Bank.

The situation that has developed in the Gaza Strip since the 2005 disengagement thus debunks three fundamental assumptions that have become axiomatic in Israeli security discourse over the past two decades:


These are but some of the major considerations that should be seriously weighed by Israeli policymakers before they commit themselves to even more disastrous “spatial separations” in the West Bank and Jerusalem.
Posted by Steve Lieblich at 8:17 am No comments:

After visiting Israel and meeting with PM Netanyahu, Indonesian cleric Yahya Cholil Staquf ... said that a "reinterpretation" of Islam is necessary for peace.

At the Global Forum of the American Jewish Committee (AJC) in Jerusalem earlier this month, Staquf was invited for a discussion on interreligious dialogue and the state of relations between Islam and Judaism.

...Indonesia, with the world's largest Muslim-majority population, does not have diplomatic relations with Israel and many Indonesians support the cause of Palestinians....

In an interview with DW, cleric Staquf explained that the goal of Indonesia and NU is to promote world peace. According to Staquf, religious morality is an important element in the peace process.

DW: What was your impression of Prime Minster Benjamin Netanyahu?

Yahya Cholil Staquf, Generalsekretär der Nahdlatul Ulama: 'I ask clerics from all religions to think about what solutions religion can offer to various conflicts that are engulfing the world today'

Do you feel Netanyahu took advantage of your presence in calling an impromptu meeting?

Yes, but it was reasonable for him to make use of it. I can also take advantage of him. For example, I can use the leverage of that meeting to reinforce the messages I want to convey.

However, if he wants to take advantage of my presence, what exactly are the benefits that can be obtained? I have affirmed many times that I am not a government delegate, nor a messenger of the NU. Therefore, he cannot claim to have the support of Indonesia, nor can he claim NU's support. There is no diplomatic advantage. If the [Indonesian] government still does not want to open diplomatic relations with Israel, he can't do anything.

What was the mission that brought you to Israel?

I received an invitation from the American Jewish Committee (AJC) to give a presentation at their forum. It was similar to the invitation that the late Indonesian leader Gus Dur had received 16 years ago. So at the AJC forum, I was presented in the same frame of dialogue as Gus Dur was.

What message do you want to convey there?

I ask clerics from all religions to think about what solutions religion can offer to various conflicts that are engulfing the world today. Religion is often used as justification and even weapon for conflict. Is religion really just for this or does it offer a solution?

Can Islam inspire peace between Israelis and Palestinians?

Maybe, as long as Islamic thinkers are willing to re-contextualize. Why is Islam functioning as the justification for conflict today? It is the fruit of an Islamic interpretation coming from the middle ages. If Islam wants to function more constructively in the present age, there must be contextual adjustment, because reality has fundamentally changed.

So if the mindset of the past is forced, it will certainly cause problems. And Muslims must be aware that conflict will continue to prevail if we are not willing to change our mindset.

Is it possible to re-contextualize the Islamic interpretation in relation to the conflict with Israel?

But as the established political system was founded, there was a confirmation of interpretation. This is what legitimizes the existing political system. Actually if we refer to the former exegesis, I am sure there must be a reference that we can use to understand the present reality with a more constructive point of view.

Posted by Steve Lieblich at 11:13 am No comments:

The announcement on 27 June 2018, regarding the intention of the Government of Poland to revise the controversial amendment to the Act on the Institute of National Remembrance, approved on 26 January 2018 by the Polish Sejm, stirred hopes of a positive development and a step in the right direction.

Pursuant to the announcement, the Prime Ministers of Poland and Israel released a joint statement declaring the deletion of Sections 55a and 55b of the amendment, which defined any public reference —“contrary to the facts”— that the Polish Nation or the Polish State was responsible and/or shared responsibility for “Nazi crimes committed by the German Third Reich” as a criminal offense, subject to up to three years in prison.

A thorough review by Yad Vashem historians shows that the historical assertions, presented as unchallenged facts, in the joint statement [by the Prime Ministers] contain grave errors and deceptions, and that the essence of the statute remains unchanged even after the repeal of the aforementioned sections, including the possibility of real harm to researchers, unimpeded research, and the historical memory of the Holocaust.

The statement contains highly problematic wording that contradicts existing and accepted historical knowledge in this field.

The joint statement’s wording effectively supports a narrative that research has long since disproved, namely, that the Polish Government-in-Exile and its underground arms strove indefatigably—in occupied Poland and elsewhere—to thwart the extermination of Polish Jewry. As such, they created a “mechanism of systematic help and support to Jewish people” and even took vigorous action against Poles who betrayed Jews. Although the joint statement acknowledges that there were cases in which Poles committed cruelties against Jews, it also says that “numerous Poles” risked their lives to rescue Jews.

The existing documentation and decades of historical research yield a totally different picture: the Polish Government-in-Exile, based in London, as well as the Delegatura (the representative organ of this Government in occupied Poland) did not act resolutely on behalf of Poland’s Jewish citizens at any point during the war. Much of the Polish resistance in its various movements not only failed to help Jews, but was also not infrequently actively involved in persecuting them...
Posted by Steve Lieblich at 8:35 am No comments: