Syrian President Bashar Assad during an interview broadcast on Al-Manar Television on Thursday, May 30, 2013. (photo credit: AP/Al-Manar Television)
...Russia’s S-300 missiles would significantly boost Syria’s air defenses and be a game-changer, but Assad was unclear about whether Syria has received a first shipment.
Earlier Thursday, Al-Manar had sent text messages to reporters with what it said was an excerpt from the interview.
The station quoted Assad as saying Syria had received a first shipment of such missiles. The Associated Press called Al-Manar after receiving the text message, and an official at the station said the message had been sent based on Assad’s comments.
In the interview, Assad was asked about the S-300s, but his answer was general.
He said Russia’s weapons shipments are not linked to the Syria conflict. “We have been negotiating with them about different types of weapons for years, and Russia is committed to Syria to implement these contracts,” he said.
“All we have agreed on with Russia will be implemented and some of it has been implemented recently, and we and the Russians continue to implement these contracts,” he said.
Posted by Steve Lieblich at 7:55 am No comments: 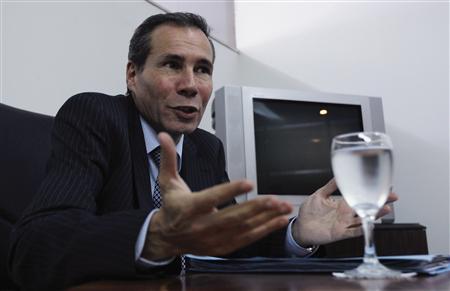 An Argentine prosecutor accused Iran on Wednesday of establishing terrorist networks in Latin America dating back to the 1980s and said he would send his findings to courts in the affected countries.
State prosecutor Alberto Nisman is investigating the 1994 bombing of a Jewish community center in Buenos Aires that killed 85 people. Argentine courts have long accused Iran of sponsoring the attack.
Iran, which remains locked in a stand-off with world powers over its disputed nuclear program, denies links to the blast. No one was immediately available to comment at the Iranian embassy in Buenos Aires on Wednesday.
In a 500-page-long document, Nisman cited what he said was evidence of Iran's "intelligence and terrorist network" in Argentina, Brazil, Paraguay, Uruguay, Chile, Colombia, Guyana, Trinidad and Tobago and Suriname - among others.
In the case of the AMIA (Asociacion Mutual Israelita Argentina) center bombing in Buenos Aires, Argentina has secured Interpol arrest warrants for nine men - eight Iranians and one person presumed to be Lebanese. Iranian Defense Minister Ahmad Vahidi is among the officials sought by Argentina, which is home to Latin America's largest Jewish community.
Another Iranian with an outstanding arrest warrant against him in the case is Mohsen Rezaie, a former head of the Revolutionary Guards who is running for president.
Nisman said new evidence underscored the responsibility of Mohsen Rabbani, the former Iranian cultural attache in Argentina, as mastermind of the AMIA bombing and "coordinator of the Iranian infiltration of South America, especially in Guyana."
Nisman said U.S. court documents showed Islamist militant Abdul Kadir - who was sentenced to life in prison in 2010 for participating in a foiled plan to attack John F. Kennedy International Airport in New York - was Rabbani's disciple.
Kadir "received instructions" from Rabbani "and carried out the Iranian infiltration in Guyana, whose structure was nearly identical ... to that established by Rabbani in Argentina," the prosecutor wrote.
Nisman urged Interpol to intensify its efforts to execute the arrest warrants...
Posted by Steve Lieblich at 5:08 am No comments:

Posted by Steve Lieblich at 9:22 pm No comments:

The antisemitism campaign based on 3 lies

From PM Netanyahu's message to the Global Forum for Combating Antisemitism Conference 2013:

﻿
Three vilifications
are the antisemitic campaign that is levelled against the Jewish people and their state.

I commend all the delegates attending the Global Forum for Combating Antisemitism.
There were two myths about antisemitism.
The first was that after the Holocaust antisemitism would disappear.
And the second was that with the creation of the Jewish state, antisemitism would disappear.
That didn't happen. Neither one of them.
In fact, the antisemites took a respite after the Holocaust, but that's all it was. It was a brief intermission.
And what was unfashionable is now becoming fashionable again. After the rise of Israel, what is fashionable today is to say, "Well, I don't hate Jews, I just don't think they should have a state." Or, effectively, that their state is an illegitimate one that doesn't have the right to exist.
To further this attack on the Jewish state, three arguments are put forward by the antisemites all the time, and they are false all the time.
The first is that Israel is guilty of war crimes. We, who fight war criminals with measured means, whose cities are attacked by terrorists who fire from built-up areas and try to pinpoint the rocketeers - we are accused of war crimes by the war criminals. That is one facet of the vilification that we experience.
The second is that we are expansionists, we don't want peace, we never agree to compromise. That's patently false. The State of Israel repeatedly has offered concessions, has made concessions for peace that no other people, no other state has made in history. I don't know of any other case in which the victor made concessions in order to achieve peace, but we've done it again and again.
We are prepared to compromise for peace - for a genuine peace. This is our most reverent hope, to live in peace with our neighbors. It is not reciprocated as much as we want, and recently it is not reciprocated at all. We can only hope that it will change.
The third argument is that we are violators of human rights. Did you hear that? Israel, the one country in the vast expanse that recognizes the rights of everyone - women, minorities, every individual - who have access to the best court system in the world. Israel has a free press and a vibrant democracy, and Israel is accused of violating human rights. This is when in our neighborhood hundreds of people are killed daily, massacred daily in neighboring regimes.
... there is only one remedy for the slander, and that's the truth. And I encourage you to fight and win the battle of truth...
Posted by Steve Lieblich at 8:32 am No comments:

A Global Tsunami of Anti-Semitism


Participants at the fourth conference of the Global Forum for Combating anti-Semitism, held under the auspices of the Foreign Ministry this week in Jerusalem, will be provided with data highlighting the accelerated global erosion of the status of Jews and Israel.