US disengagement signals both fatigue and weakness

EXECUTIVE SUMMARY: The American retreat from the Middle East signals weakness, and encourages an Iranian quest for regional hegemony that was bolstered by the P5+1 nuclear deal. The most dangerous consequence of current American foreign policy in the region is the likelihood of nuclear proliferation. Moreover, the current American approach allows for Russian encroachment in the region, which enhances the power of the radical axis led by Iran. It also opens the way for the ‘Finlandization’ of the Gulf and the Caspian basin by Iran. US weakness in the Middle East inevitably will have ripple effects in other parts of the globe. 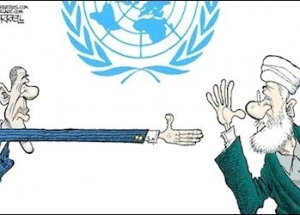 The US, under President Barack Obama, has signaled its intent to reduce its presence in the Middle East. The US fought two unsuccessful wars in the region – a frustrating lesson about the limits of its power. At the same time, US dependency upon Middle Eastern energy has been reduced thanks to domestic progress in fracking technology. Moreover, Washington has decided to “pivot” to China, an emerging global challenger, and also to cut defense expenditures, leaving fewer military assets available for projecting power in the Middle East. (For a while during President Obama's tenure, the US had no aircraft carriers in the eastern Mediterranean or in the Gulf at all, an unprecedented situation.) In addition, the American campaign against ISIS has been extremely limited, and has met with little success.

Unfortunately, this disengagement signals both fatigue and weakness.

Washington also has desisted from confronting Iran, and has gone to great lengths to accommodate it. President Obama's contention is that by completing a nuclear deal with Iran, he resolved one of the outstanding security issues in the region before leaving office. However the deal legitimizes a large nuclear infrastructure in Iran, and ignores the cardinal national security interests of at least two US allies: Israel and Saudi Arabia. The subsequent removal of international economic sanctions – with no reciprocal requirement for any change in Iranian regional policy – positions Iran to reap great financial benefits at no cost. President Obama's Iran policy has occasioned a dramatic change in the regional balance of power, yet Washington appears largely unperturbed.

Whereas US policy on Iran has been guided primarily by wishful thinking, the apprehensions of regional actors with regard to Iran's hegemonic ambitions have multiplied in response to the nuclear deal. While Washington claims to be confident that Iran will play "a responsible regional role," leaders in Ankara, Cairo, Jerusalem and Riyadh see Iran as almost entirely unaltered from its pre-deal state in any meaningful political sense, with the potential to produce nuclear bombs in a short time.

The gravest consequence of the US policy of disengagement from the region is the increased probability of nuclear proliferation. Powers contending for regional leadership, such as Egypt, Turkey and Saudi Arabia will not stand idly by in the nuclear arena, particularly as the US is no longer seen as a reliable security provider. US attempts to convince regional powers to rely on an American nuclear umbrella in an attempt to prevent nuclear proliferation are likely to fail. The emergence of a multi-polar nuclear Middle East, which is a plausible consequence of the American nuclear accommodation with Iran, will be a strategic nightmare for everyone.

An emboldened Iran, which traditionally acts through proxies rather than through military conquest, might intensify its campaign to subvert Saudi Arabia, possibly by playing the Shiite card in the Shiite-majority and oil-rich Eastern province. The loss of that province would considerably weaken the Saudi state and might even bring about its disintegration.

Iran could use subversion, terrorist attacks and intimidation of the Gulf states to evict the thinning American presence completely from the Gulf. In the absence of American determination and ability to project force, Iranian superior power might ‘Finlandize’ the Gulf countries. We could also see also the ‘Finlandization’ of the Caspian basin, where Iran shares the coast with important energy producers like Azerbaijan and Turkmenistan. The Caspian basin and the Persian Gulf form an “energy ellipse” that contains a large part of the world’s energy resources.

Azerbaijan and Turkmenistan are very fearful of growing Iranian influence. It is possible that those countries, which adopted a pro-Western foreign policy orientation after the dissolution of the Soviet Union, might decide to return to the Russian orbit, because Russia appears at present to be a more reliable ally than the US.

Russia is fully alive to the potential for a reassertion of a Russian role in the region in the wake of an American retreat. To that end, it has taken the major step of intervening militarily in Syria to assure the survival of Assad’s regime. The Syrian littoral is a vital base for enhanced Russian naval presence in the eastern Mediterranean, and this preceded Russian air participation in the Syrian civil war. In addition, Russia wants to protect energy prospects that depend on Assad's survival. It already has signed exploration contracts with the Assad regime with regard to the recent gas discoveries in the Levant basin.

Syria has been an ally of Iran since 1979 – the longest alliance in the Middle East. The preservation of the Assad regime is critical to Iranian interests because Damascus is a linchpin to its proxy, the Hezbollah in Lebanon. Russia's efforts on Assad's behalf thus directly serve the interests of the Iranian regime. If successful, those efforts will further Iranian influence in the region.
Outside Syria, we may see Iran join Russia in supporting Kurdish political ambitions in order to weaken Turkey, Iran's rival for regional leadership. The Kurds are a thorn in Turkey’s side. Iran and Turkey are supporting opposing sides in the civil war in Syria, where the Kurds are carving out autonomous regions. Depending on how the war transpires, Kurdish national dreams might benefit from the power vacuum created by the disruption of the Arab statist structure and the American exit from the region.

As to Egypt, American reluctance to support the al-Sisi regime plays into Russian hands. The Russians are selling weapons to Egypt, negotiating port rights in Alexandria, and supplying Egypt with nuclear reactors. In Iraq too, we see the harbingers of a Russian presence in coordination with Iran, as American influence in that state continues to wane.

The rise of a more aggressive Iran – a direct consequence of the US retreat – may bring about greater tacit cooperation among Egypt, Jordan, Saudi Arabia and Israel. The big question is whether Turkey will join such an anti-Iranian alignment.

US weakness in the region inevitably will have ripple effects in other parts of the globe. American credibility is now subject to question, and allies elsewhere may determine that it would be wise to hedge their bets. Greater challenges await the US beyond the Middle East.
Posted by Steve Lieblich at 7:03 am No comments: Links to this post

...Iran test-fired ballistic missiles designed to be able to hit Israel ...a "blatant violation" of the nuclear agreement reached between Iran and Western powers last July.

In a photo provided by Iran's Fars News Agency Wednesday, a Qadr H long-range missile is seen being fired by Iran's Revolutionary Guards

In the statement, the [Israel] Foreign Ministry said that

"U.N. Resolution 2231 restricts Iran from launching missiles that are capable of carrying nuclear warheads, and that is precisely the kind of missiles that Iran launched. ...Iran is making a mockery of the international community's demands and continues to develop its attack capabilities. It appears that [Iranian Foreign Minister Mohammad Javad] Zarif's and [Iranian President Hassan] Rouhani's diplomatic charm offensive was nothing more than a smokescreen, designed to conceal the ayatollah regime's true intentions."

"Iran's missile program will not stop under any circumstances. The IRGC has never accepted the U.N. Security Council resolutions on Iran's missile work. We are always ready to defend the country against any aggressor. Iran will not turn into Yemen, Iraq or Syria. The more sanctions and pressure our enemies apply ... the more we will develop our missile program..."...

Clinton, a former secretary of state under President Barack Obama, said she was "deeply concerned" by the tests. "Iran should face sanctions for these activities and the international community must demonstrate that Iran's threats toward Israel will not be tolerated," said Clinton, who is ahead in the race to be the Democratic nominee at the Nov. 8 presidential elections.

Her call for sanctions reflected a tougher line against Iran's recent missile activity than that taken so far by the White House, which said it is aware of and reviewing reports of the Iranian tests, and would determine an appropriate response.

"We know that Iran is in a season of carrying out a number of military activities, and so it certainly would not be a surprise if there are additional launches over the next several days," White House spokesman Josh Earnest said.

The Iranian move on Wednesday came despite warning from the U.S. State Department after Tuesday's missile tests that Washington continues to "aggressively apply our unilateral tools to counter threats from Iran's missile program," a possible reference to additional U.S. sanctions.

U.S. Vice President Joseph Biden, who was visiting Israel on Wednesday, declared that "we will act," if Iran breaks the terms of the nuclear deal.

Israeli Defense Minister Moshe Ya'alon told Israel Radio the tests showed Iran's hostility had not changed since implementing a nuclear deal with world powers in January, despite Rouhani's overtures to the West.

"To my regret there are some in the West who are misled by the honeyed words uttered by part of the Iranian leadership while the other part continues to procure equipment and weaponry, to arm terrorist groups.." ...

"Iran is making a mockery of President Obama's vow to confront Iran's dangerous and illicit acts." He urged Obama to "aggressively enforce all sanctions against Iran's missile programs, support for terrorism and human rights abuses. No more looking the other way."

Washington imposed sanctions against businesses and individuals in January over another missile test in October 2015. But the IRGC said it would not bow to pressure.

The IRGC maintains dozens of short and medium-range ballistic missiles, the largest stock in the Middle East...
Posted by Steve Lieblich at 6:54 am No comments: Links to this post