Jeremy Corbyn and the Socialism of Fools

At the root of his bigotry is a Marxist hatred of capitalist U.S. ‘imperialism.’ 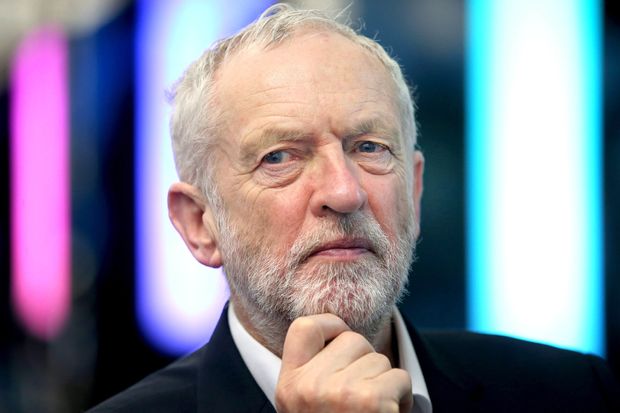 That Jeremy Corbyn, who hopes someday to occupy the office previously held by Winston Churchill, Benjamin Disraeli and William Pitt, is an anti-Semite seems no longer in question. No anti-Israeli terrorist entity is too drenched in Jewish blood for him to cheer on. Hamas, Hezbollah, the mullahs of Iran—their sins against freedom of speech, against freedom of assembly, and against women and gays may be crimson, but if they hate the Jewish state enough, Labour has a leader who will wash them as white as snow.

But not all anti-Semites are alike. Different forms of anti-Semitism can have very different consequences. What kind does Jeremy Corbyn profess, and how does it relate to the rest of his worldview?

Mr. Corbyn and his colleagues in the hard-left Labour elite are, above all, modern. They don’t hate the Jews for killing Christ as medieval Christians did. They don’t think the Jews use the blood of gentile children to make matzoh. Whatever some of the less enlightened members of Mr. Corbyn’s base among the British Muslim community may think, the secular Labour elite doesn’t blame the Jews for rejecting Muhammed.

Nor is their hatred racial. Mr. Corbyn’s worldview is blinkered and sadly skewed, but he is neither wicked nor delusional enough to imagine that the Jewish “race” is competing with the “Aryan” Anglo-Saxons to dominate the world.

It is Zionism that drives Mr. Corbyn’s anti-Jewish passion. He is not anti-Israel because some or even many of Israel’s policies are wrong. He is existentially anti-Zionist. He does not believe that the Jewish people are a nation. From this point of view, the notorious U.N. Resolution 3379 of 1975 got it exactly right: Zionism is racism, and the Jewish state is racist to the core.

What elevates the Jewish state from an irritation to an obsession in the Corbynite world is Israel’s relationship with the U.S. The U.S. is the center of international capitalism. Destroying American capitalism and the imperialist system it imposes on the world is the overarching goal of the Marxist zealotry that drives Mr. Corbyn’s worldview and justifies his sympathy for otherwise dubious regimes. The Iranian mullahs may hang homosexuals and stone the occasional adulteress, but in the all-important struggle against American imperialism and its Zionist sidekick, they are a natural and necessary part of the Resistance.

It’s a short step for hard-left Labour from hating Israel to finding “Zionist” conspiracies on every side. Marxism typically rejects liberal democracy as a sham. Rich and powerful capitalists make all the big decisions: They control the political parties, they control the press, and they use the facade of democratic politics to amuse, befuddle and ultimately control the masses. From this standpoint, conspiracy thinking isn’t a sign of ignorance or emotionalism; to the contrary, perceiving the hidden plots of our true rulers is a necessary and vital step in seeing through the myth of liberal democracy.

The hard-line Marxist and the classic anti-Semite agree that the world is really run by a cabal of greedy men behind closed doors. But where the Marxist sees capitalist string-pullers, some of whom may happen to be Jewish, the anti-Semite sees only Jews. This is the meaning behind the famous statement, once popular on the European left, that anti-Semitism is the “socialism of fools”: the anti-Semitic conspiracy theories are too narrow and miss the real point.

But for Jeremy Corbyn and his Labour colleagues, the perceived special relationship between American imperialism and Zionism collapses the distinction between the socialism of fools and the “real” thing. The urban legend that “the Jews” control America’s Middle Eastern policy and that Jewish power forces the U.S. to march in lockstep with right-wing Israeli governments is also an organizing principle of the Corbynite worldview. The supposed control exerted by Zionist Jewish billionaires over American politics makes the fight against imperialism also a fight against a powerful Jewish conspiracy.

Yet myths are no less powerful because they are false. Mr. Corbyn’s outlook will lead any government he forms into deep trouble and frustration, but that in itself won’t keep him out of Downing Street. Liberalism today may face its deepest crisis in the country that gave the liberal tradition to the world.
Posted by Steve Lieblich at 3:38 pm