Meir Dagan: From the shadow of the Holocaust to the top of the Mossad

When news of Meir Dagan's death broke on Thursday morning,  Mossad chief Yossi Cohen expressed on behalf of the organization's employees and its past chiefs deep sorrow at the news of his death and sent condolences to the Dagan family.

Dagan, the tenth Mossad chief, was appointed by his close friend Ariel Sharon and served atop the organization from 2002 until December 2010. He is most identified with clandestine operations to prevent and thwart Iran's nuclear program and its intentions to produce an atomic bomb.
During his tenure, he implemented far-reaching structural changes in the Mossad with the aim of making it a more operations-based organization.
While Dagan headed the Mossad, a number of operations were attributed to the organization, including the assassination of five Iranian nuclear scientists, sabotage of equipment in Iran's nuclear facilities, and the implanting of viruses into the computers that operated the centrifuges to enrich uranium at the Natanz facility in Iran.
Another important intelligence feat that is attributed to the Mossad under Dagan was the information obtained by its agents from a computer owned by the chairman of Syria's Atomic Energy Commission. That intelligence was the smoking gun which shaped the decision by then-prime minster Ehud Olmert, with the tacit approval of US President George W. Bush, to bomb the Syrian nuclear reactor in December 2007. ...In 2008, Imad Mughniyeh, the man considered Hezbollah's "defense minister," was assassinated by Mossad agents, who played a major role in the operation with the assistance of the CIA in Damascus, according to foreign reports.
Dagan was born in the Soviet Union in 1945 to parents who were Holocaust survivors that moved to Israel after the founding of the state. He lived in Bat Yam and enlisted to the Paratroopers Brigade, becoming the commander of the Rimon Reconnaissance Unit which operated in the Gaza Strip during the height of the Palestinian terror wave in the early 1970s. Afterward, he was promoted to fill a number of roles in the IDF command, reaching the rank of Major General.
Among other things, he is considered one of the developers of guerrilla warfare doctrine in the IDF, based on his military experience fighting Palestinian terrorism in Gaza and later in south Lebanon. These operations cemented his image as a daring combatant who was ready to sanction any means to achieve his aim or target, including the assassination of terrorists.
During his time in the IDF, and especially during the Yom Kippur War in 1973, Dagan was considered a confidant of Ariel Sharon. After Sharon became prime minister, he appointed Dagan to head the Mossad..
...and from the Forward, 18 March 2016, by JJ Goldberg:
Dagan was born Meir Huberman in Siberia in January 1945 to Polish-Jewish Holocaust survivors fleeing eastward from the Nazis. For years he kept a photo on his office wall of his maternal grandfather, Ber Erlich Sloshny, kneeling before Nazi soldiers moments before they shot him dead in 1942. 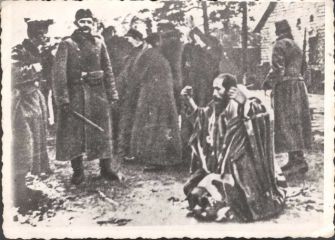 Share
The deadly campaign alarmed the army’s General Staff and contributed to Sharon’s already growing notoriety for brutality. But for Dagan, Sharon’s young protégé, it was the beginning of his lifelong reputation for derring-do. In one incident, Dagan tackled a Palestinian preparing to throw a grenade and subdued him before the grenade could go off. That won Dagan a medal of valor.
Over the next quarter-century Dagan held a series of command positions. He saw combat in the Yom Kippur and First Lebanon wars, was in the first units crossing the Suez Canal in 1973 and entering Beirut in 1982. He spearheaded the creation of the pro-Israel Christian militia known as the South Lebanon Army and held several senior posts at General Staff headquarters.
Dagan’s retirement from the army in 1995 was short-lived. In 1996, following the Rabin assassination, he was tapped by incoming Prime Minister Shimon Peres to serve as deputy director and then director of his counter-terrorism staff, continuing in the post after Benjamin Netanyahu became prime minister later that year. In the 2001 prime ministerial election he led Ariel Sharon’s campaign staff, and then signed on as Sharon’s national security adviser. The following year, 2002, Sharon named him director of the Mossad. The agency was demoralized at the time, having suffered several embarrassing fumbles during the late 1990s. Sharon reputedly instructed Dagan to turn it once again into an outfit “with a knife between its teeth.”
Dagan did just that. Over the next eight-and-a-half years the Mossad played a central role in slowing Iran’s nuclear project and improving clandestine security ties with ostensibly hostile Arab states. Among its known operations, it is believed to have assassinated five Iranian nuclear scientists. In cooperation with American intelligence, it developed and tested the Stuxnet computer virus that destroyed about one-fifth of the uranium centrifuges at Iran’s Natanz nuclear facility. Dagan’s Mossad allegedly also gathered the intelligence leading to the 2007 air strike on Syria’s plutonium nuclear reactor, then under construction with North Korean assistance, by breaking into the laptop computer of an Iranian negotiating in Vienna.
Dagan later told an interviewer that heading the Mossad was a bit like running a Chevra Kadisha, a traditional Jewish burial society. “You provide an essential service for people who will never know about it,” he said.
One risky Mossad operation during this period turned into a fiasco: the assassination of Hamas arms purchaser Mahmoud al-Mabhouh. The assassination took place in January 2010 in a hotel room in Dubai, but the operation was captured on hotel security cameras. The hit squad’s 26 members were identified as Mossad agents in amateurish disguises, and their pictures were published around the world. Dubai obtained Interpol arrest warrants and the agents were forced to go aground in Israel. The incident also caused a diplomatic crisis between Israel and several friendly countries whose passports the agents had used, including the United Kingdom, Australia and Ireland. The Mossad had allegedly appropriated the passports from dual citizens living in Israel. Israel got an international black eye, but Dagan’s reputation remained intact....


...Marking Israel’s Holocaust Remembrance Day in April 2010, the popular Israeli newspaper Yediot Aharonot printed the photograph of Mr. Dagan’s grandfather on its cover.
Speaking at the Tel Aviv rally, Mr. Dagan’s voice broke with emotion as he linked his personal connection to the Holocaust with his lifelong mission of trying to safeguard Israel.
“During all the years of my service...I carried with me from place to place the photograph of my grandfather taken a moment before he was murdered by the Nazis. I swore that that would never happen again. I hope and believe that I have done everything in my power to keep that promise.”
Posted by Steve Lieblich at 11:00 pm