‘Helpless’ Hamas the perfect cause for progressives I’M often asked why I don’t write more about the Palestinian situation, and the reason I don’t is because the central fact of the dispute — the Palestinians’ Jew hatred — never changes. So I said what I had to say about it many years ago, and there’s very little to add.
For example, in The National Post on April 18, 2002 I quoted an old Colonial Office hand:
“All British officials tend to become pro-Arab, or, perhaps, more accurately anti-Jew,” wrote Sir John Hope-Simpson in the 1920s, wrapping up a stint in the British Mandate of Palestine. “Personally, I can quite well understand this trait. The helplessness of the fellah appeals to the British official. The offensive assertion of the Jewish immigrant is, on the other hand, repellent.” Progressive humanitarianism, as much as old-school colonialism, prefers its clientele “helpless”, and, despite Iranian weaponry and Iraqi money and the human sacrifice of its schoolchildren, the Palestinians have been masters at selling their “helplessness” to the West.
In Europe, colonialism may be over, but colonialist condescension endures as progressive activism, and the Palestinians are the perfect cause. Everywhere else, from Nigeria to Nauru, at some point the natives say to the paternalist Europeans, “Thanks very much, but we’ll take it from here.”
But the Palestinians?
Can you think of any other “people” who’d be content to live as UN “refugees” for four generations? They’re the only “people” with their own dedicated UN agency, and its regime has lasted almost three times as long as Britain’s Palestine mandate did.
To quote again from that 2002 Post column:
This is only the most extreme example of how the less sense the Arabs make the more the debate is framed in their terms. For all the tedious bleating of the Euroninnies, what Israel is doing is perfectly legal. Even if you sincerely believe that “Chairman” Arafat is entirely blameless when it comes to the suicide bombers, when a neighbouring jurisdiction is the base for hostile incursions, a sovereign state has the right of hot pursuit. Britain has certainly availed herself of this internationally recognised principle: In the 19th century, when the Fenians launched raids on Canada from upstate New York, the British thought nothing of infringing American sovereignty to hit back — and Washington accepted they were entitled to do so.
But the rights every other sovereign state takes for granted are denied to ­Israel. “The Jews are a peculiar people: things permitted to other nations are forbidden to the Jews,” wrote America’s great longshoreman philosopher Eric Hoffer after the 1967 war.

“Other nations drive out thousands, even millions of people and there is no refugee problem ... But everyone insists that Israel must take back every single Arab ... Other nations when victorious on the battlefield dictate peace terms. But when Israel is victorious it must sue for peace. Everyone expects the Jews to be the only real Christians in this world.”

Thus, the massive population displacements in Europe at the end of the Second World War are forever, but those in Palestine a mere three years later must be corrected and reversed. On the Continent, losing wars comes with a territorial price: the Germans aren’t going to be back in Danzig any time soon. But, in the Middle East, no matter how often the Arabs attack Israel and lose, their claims to their lost territory manage to be both inviolable but endlessly transferable.
And so land won in battle from Jordan and Egypt somehow has to be ceded to Fatah and Hamas.
As I said, this is all the stuff that never changes, and the likelihood that it will change lessens with every passing half-decade. I wrote the above column at the time Jenin and the other Palestinian “refugee camps” were celebrating their Golden Jubilee. That’s to say, the “UN Relief and Works Agency for Palestine Refugees” is older than most African, Caribbean or Pacific states.
What sort of human capital do you wind up with after four generations have been born as “refugees”? If you’ve ever met a charming, urbane Palestinian doctor or lawyer in London or Paris, you’ll know that anyone who isn’t a total idiot — ie, the kind of people you need to build a nation — got out long ago.
The nominal control of the land has passed from Jordan and Egypt to Israel to Yasser Arafat to Mahmoud Abbas to Hamas, but the UNRWA is forever, running its Mister Magoo ground operation and, during the periodic flare-ups, issuing its usual befuddled statements professing complete shock at discovering that Hamas is operating rocket launchers from the local kindergarten.
But, like I said, that’s all the stuff that never changes, decade in, decade out. The problem this time round is that everything else in the region is changing.
Jordan’s population has swollen by 25 per cent, refugees from the Syrian civil war. Does anyone seriously think the UN has plans to set up a refugee agency to minister to them until the year 2090 and beyond?
ISIS (Islamic State) has destroyed the Christian churches in Mosul and chased the entire Christian community out of town. Does anyone seriously think the Europeans will be championing Iraqi Christians’ “right of return” for the next three-quarters of a century?
ISIS is doing what winners do in war: it’s shaping the facts on the ground. It wants no Christians in Iraq, and it’s getting on with it.
General Fattah el-Sisi wants to kill the Muslim Brotherhood: he’s getting on with it.
The wilier Brothers have slipped over into a collapsing Libya to make common cause with various al-Qa’ida affiliates, as the Libyan state implodes: Its would-be successors are getting on with it.
In the new Middle East, everyone and his uncle has an Obama-Clinton “reset” button and they’ve pressed it.
But they’re not Jews. So nobody minds, and no preening Botoxicated buffoon of an American emissary comes to lecture them. 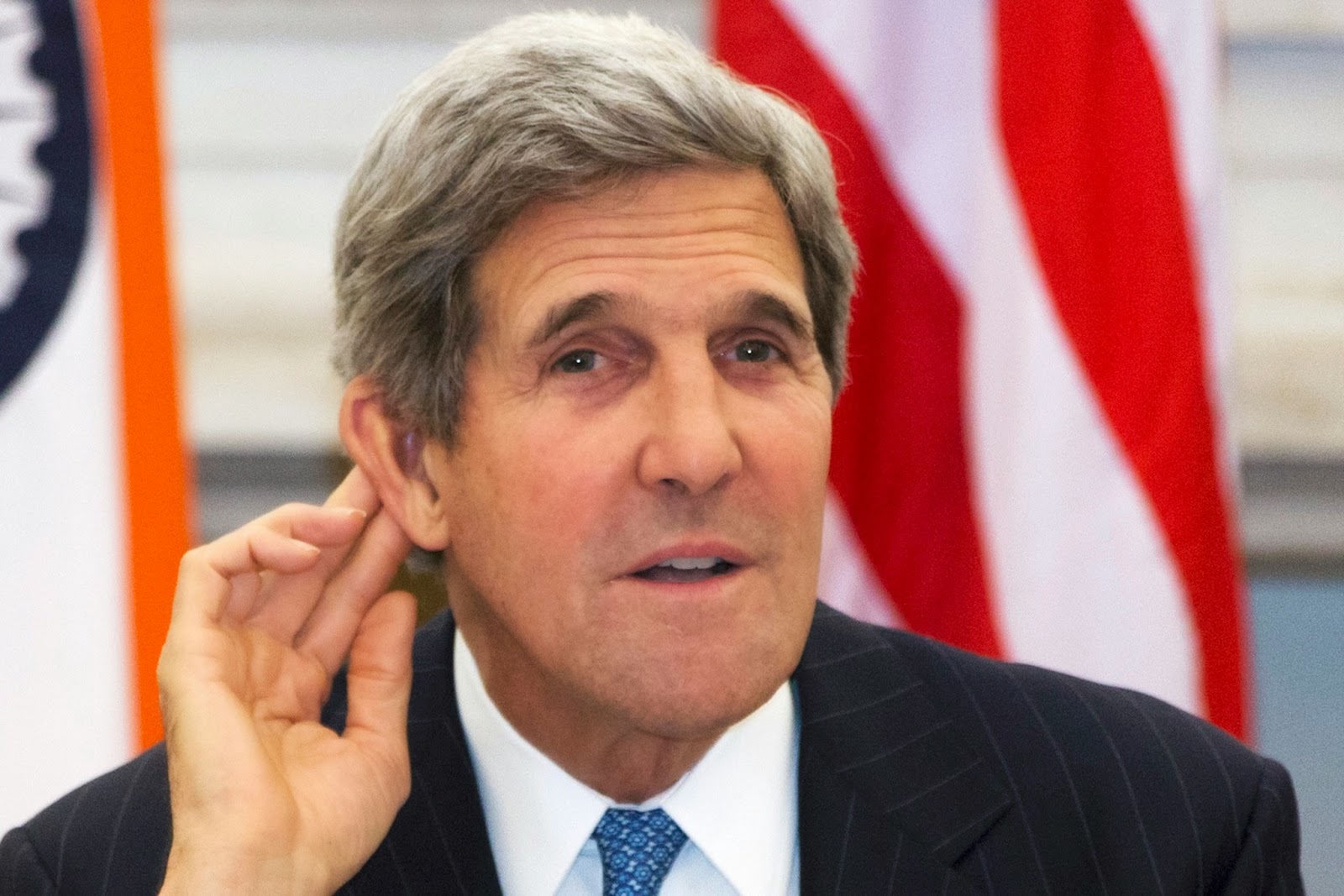 John Kerry, as Barack Obama’s plenipotentiary, is a paradox — the physical presence of a geopolitical absence:
Yesterday, upon the stair,
I met a man who wasn’t there.
He wasn’t there again today,
I wish, I wish he’d go away ...


Thus John Kerry, in Jerusalem and Cairo and beyond.
Posted by Steve Lieblich at 7:36 am