A famous speech given on September 25, 2008, at the Four Seasons, New York, by Geert Wilders, chairman Party for Freedom, the Netherlands, has relevance today as we consider the conflict in Gaza. Some brief excerpts (follow the link to read the speech in full): 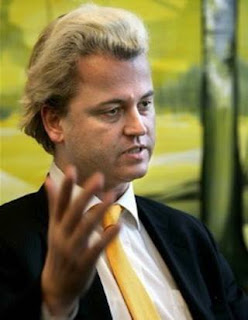 ... All is not well in the old world. ...We might be in the final stages of the Islamization of Europe. This not only is a clear and present danger to the future of Europe itself, it is a threat to America and the sheer survival of the West.

...The Europe you know is changing. ...entire Muslim neighbourhoods where very few indigenous people reside or are even seen. ...This goes for the police as well. It’s the world of head scarves... ...With mosques on many street corner. The shops have signs you and I cannot read. You will be hard-pressed to find any economic activity. These are Muslim ghettos controlled by religious fanatics. These are Muslim neighbourhoods, and they are mushrooming in every city across Europe. These are the building-blocks for territorial control of increasingly larger portions of Europe, street by street, neighbourhood by neighbourhood, city by city.

...Many European cities are already one-quarter Muslim ...Mohammed is the most popular name among boys in many cities. ...In once-tolerant Amsterdam gays are beaten up almost exclusively by Muslims. Non-Muslim women routinely hear “whore, whore”. Satellite dishes are not pointed to local TV stations, but to stations in the country of origin. ...Last week a man almost died after being beaten up by Muslims in Brussels, because he was drinking during the Ramadan.

Jews are fleeing France in record numbers, on the run for the worst wave of anti-Semitism since World War II. French is now commonly spoken on the streets of Tel Aviv and Netanya, Israel. I could go on forever with stories like this. Stories about Islamization.

A total of fifty-four million Muslims now live in Europe. San Diego University recently calculated that a staggering 25 percent of the population in Europe will be Muslim just 12 years from now. Bernhard Lewis has predicted a Muslim majority by the end of this century.

Now these are just numbers. And the numbers would not be threatening if the Muslim-immigrants had a strong desire to assimilate. But there are few signs of that. The Pew Research Center reported that half of French Muslims see their loyalty to Islam as greater than their loyalty to France. One-third of French Muslims do not object to suicide attacks. The British Centre for Social Cohesion reported that one-third of British Muslim students are in favour of a worldwide caliphate. A Dutch study reported that half of Dutch Muslims admit they “understand” the 9/11 attacks.

....The Quran calls for hatred, violence, submission, murder, and terrorism. The Quran calls for Muslims to kill non-Muslims, to terrorize non-Muslims and to fulfil their duty to wage war: violent jihad. Jihad is a duty for every Muslim, Islam is to rule the world – by the sword. The Quran is clearly anti-Semitic, describing Jews as monkeys and pigs.

...Now, I would like to say a few things about Israel. ...The best way for a politician in Europe to loose votes is to say something positive about Israel. The public has wholeheartedly accepted the Palestinian narrative, and sees Israel as the aggressor. I, however, will continue to speak up for Israel. I see defending Israel as a matter of principle.

...This tiny country is situated on the fault line of jihad, frustrating Islam’s territorial advance. Israel is facing the front lines of jihad, like Kashmir, Kosovo, the Philippines, Southern Thailand, Darfur in Sudan, Lebanon, and Aceh in Indonesia. Israel is simply in the way. The same way West-Berlin was during the Cold War.

The war against Israel is not a war against Israel. It is a war against the West. It is jihad. Israel is simply receiving the blows that are meant for all of us. If there would have been no Israel, Islamic imperialism would have found other venues to release its energy and its desire for conquest. Thanks to Israeli parents who send their children to the army and lay awake at night, parents in Europe and America can sleep well and dream, unaware of the dangers looming.

Many in Europe argue in favor of abandoning Israel in order to address the grievances of our Muslim minorities. But if Israel were, God forbid, to go down, it would not bring any solace to the West. It would not mean our Muslim minorities would all of a sudden change their behavior, and accept our values. On the contrary, the end of Israel would give enormous encouragement to the forces of Islam. They would, and rightly so, see the demise of Israel as proof that the West is weak, and doomed. The end of Israel would not mean the end of our problems with Islam, but only the beginning. It would mean the start of the final battle for world domination. If they can get Israel, they can get everything.

...It is very difficult to be an optimist in the face of the growing Islamization of Europe. All the tides are against us. On all fronts we are losing. Demographically the momentum is with Islam. Muslim immigration is even a source of pride within ruling liberal parties. Academia, the arts, the media, trade unions, the churches, the business world, the entire political establishment have all converted to the suicidal theory of multiculturalism. So-called journalists volunteer to label any and all critics of Islamization as a ‘right-wing extremists’ or ‘racists’. The entire establishment has sided with our enemy. Leftists, liberals and Christian-Democrats are now all in bed with Islam.

This is the most painful thing to see: the betrayal by our elites. At this moment in Europe’s history, our elites are supposed to lead us. To stand up for centuries of civilization. To defend our heritage. To honour our eternal Judeo-Christian values that made Europe what it is today. But there are very few signs of hope to be seen at the governmental level. Sarkozy, Merkel, Brown, Berlusconi; in private, they probably know how grave the situation is. But when the little red light goes on, they stare into the camera and tell us that Islam is a religion of peace, and we should all try to get along nicely and sing Kumbaya. They willingly participate in, what President Reagan so aptly called: “the betrayal of our past, the squandering of our freedom.”

...Dear friends, liberty is the most precious of gifts. My generation never had to fight for this freedom, it was offered to us on a silver platter, by people who fought for it with their lives....We can only hand over this hard won liberty to Europe’s children in the same state in which it was offered to us. We cannot strike a deal with mullahs and imams. Future generations would never forgive us. We cannot squander our liberties. We simply do not have the right to do so....
Posted by Steve Lieblich at 9:10 am