Rice and Livni meet in Jerusalem 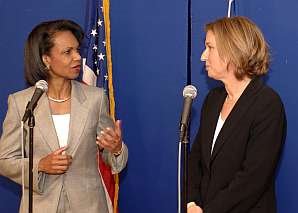 US Secretary of State Condoleezza Rice arrived in Israel on Monday for talks about the ongoing fight between Israel and Hizbullah guerrillas in Lebanon, saying that she was looking for a sustainable peace.

The United States has not yet pushed for Israel to halt its offensive in Lebanon, saying that it did not support a deal that would leave Hizbullah guerrillas on Israel's border.

"Every peace has to be based on enduring principles," Rice said, speaking to the media before she met with Israeli Foreign Minister Tzipi Livni. "Ultimately, a Middle East that is peaceful and democratic will be a place where peace is sustainable," she said.

Rice flew to Israel after making a surprise visit to Beirut. "We are concerned about the humanitarian situation," she said. "And nobody wants to see when innocent civilians are harmed."

Livni said that Israel would only agree to a cease-fire that included the release of two soldiers that Hizbullah kidnapped July 12, the dismantling of Hizbullah and the deployment of the Lebanese army in southern Lebanon. "We will not and we cannot expect less than to succeed," she said.
Posted by Steve Lieblich at 4:54 am