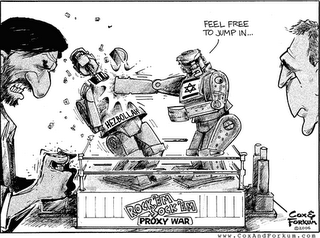 In response to Iranian re-supplies to Hizballah, a US arms airlift began running to Israel Saturday, July 22

It is carrying fresh stock of bombs, missiles and spare parts for Israeli Air Force aircraft and helicopters. Giant Galaxy C141 transports have been landing, unloading and taking off at short intervals.

The American airlift to Israel follows the air corridor Iran opened to replenish Hizballah’s stocks on Wednesday, July 19, landing supplies at Syria’s Abu Ad Duhur military airfield north of Homs. The deliveries for Hizballah include large quantities of new missiles, including the long-range Zelzal and Fajr 3 and Fajr 5 missiles, Katyusha rockets, anti-tank and anti-air missiles sent out from the RG HQ in Bandar Abbas on the Persian Gulf. Some of these missiles can reach Tel Aviv and Jerusalem.

Syria has placed its army, Scud missiles and air force in a state of preparedness.
Posted by Steve Lieblich at 5:53 am