From the Begin-Sadat Center for Strategic Studies, Perspectives Paper No. 280, January 4, 2015, by Prof. Efraim Inbar: 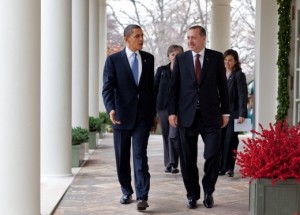 EXECUTIVE SUMMARY: Turkey is formally a NATO ally. But Erdogan-led Turkey has not behaved as an ally or a friend of the US for years. It is a mystery why the Obama Administration refuses to acknowledge that Turkey is a Trojan horse in NATO, and that Ankara undermines American interests in the Middle East and elsewhere.

Turkey is a NATO ally, and President Barrack Obama has called the current President of Turkey, Recep Tayyip Erdogan, his best friend. But Erdogan-led Turkey does not behave as an ally or a friend of the US. This is not a new development.
Erdogan and his Islamist party, the AKP, have ruled Turkey since 2002. Erdogan’s Turkey has gradually distanced itself from the West, adopting domestic and foreign policies fueled by Ottoman and Islamist impulses.
Turkey has been on the road to an authoritarian regime for several years. Infringements on human rights have gradually increased. In truth, Turkey has never had a political system with checks and balances able to constrain attempts to consolidate power around one politician. In recent years, Erdogan has weakened further the few constitutional constraints against the ‘Putinization’ of the Turkish political system.
The longer Erdogan rules, the more power hungry he seems. His authoritarian personality becomes clearer every day. The press is hardly free. Erdogan arrests even Islamist journalists that are critical of his policies. His party has infiltrated the judicial system and the police. Foci of power, such as the bureaucracy, the banking system, industrial associations and trade unions have been mostly coopted by the AKP. Opposition political parties are largely discredited. The military, once active in politics as the defender of the Kemalist secular tradition, has been successfully sidelined.
From a realpolitik perspective, the domestic political developments, deplorable as they may be in Turkey, could be ignored by the democratic West as long as Ankara continues to be a useful ally. Unfortunately, Turkey no longer qualifies as a trusted ally.
The most recent examples of nefarious Turkish behavior are its support of ISIS and Hamas. Turkey is playing a double game on the issue of the Islamic State. It pretends to cooperate with the US policy in the attempt to contain radical Islam, but actually Turkey supports ISIS. It allows volunteers passage through Turkish territory to join ISIS in Iraq. ISIS receives logistical support via Turkey, and sends its wounded militants for treatment there. Turkish military forces stood idly by the besieged city of Kobani, just across the Turkish border, while the Islamists killed Kurdish fighters. Finally, Turkey denies the American air force access to Turkish bases; forcing the US to use far away bases when attacking ISIS targets.
Turkey is also openly supporting another radical Islamist organization – Hamas. Despite the fact that the West regards Hamas a terrorist organization, Ankara regularly hosts Hamas representatives that meet the highest Turkish dignitaries. Hamas, an offshoot of the Muslim Brotherhood, has a rabid anti-American position. Moreover, Salah al-Aruri, a senior Hamas operative, operates out of Istanbul. Recently, the Turkish branch of Hamas was involved in a series of attempts to carry out terrorist attacks against Israel, and in orchestrating a coup against the current leadership of the Palestinian Authority.
Such behavior should not surprise policy makers in Washington. In 2003, Ankara denied the request from Washington to open its territory so that the US military could attack Saddam Hussein’s forces from two separate fronts.
AKP-ruled Ankara also defied American preferences on Syria, a country allied with radical Iran and on the American list of states supporting terrorism. In January 2004, Bashar Assad became the first Syrian president ever to visit Turkey. In April 2009, the two states conducted their first ever joint military exercise. No other NATO member had such close relations with the authoritarian regime in Damascus, which has been closely allied with Iran for several decades.
Turkey further deviated from the Western consensus in 2008 by hosting Sudanese President Omar Hassan al-Bashir twice. Bashir, who was charged with war crimes and genocide in Darfur, presided over an Islamist regime.
Turkey even welcomed the president of the Islamic Republic of Iran, Mahmoud Ahmadinejad, for a visit in August 2008. No Western country has issued such an invitation to the Iranian leader. Additionally, Erdogan congratulated Ahmadinejad immediately after his re-election in June 2009. When it comes to Iran’s nuclear threat, Ankara, unlike its NATO allies, has refused to adopt the U.S. stance on harsher sanctions, fearing in part the economic consequences of such steps. In June 2010, Turkey voted at the UN Security Council against a US-sponsored resolution meant to impose a new round of sanctions on Iran.
Turkey also has consistently defied advice from Washington to tone down its anti-Israel statements and mend relations with an important American ally. All American efforts in this direction have failed.
There is also a clear divergence between the US and Turkey on important global issues such as Russia and China. For example, the US. wanted to send ships into the Black Sea via the Bosphorus Straits during the Georgia war in August 2008. Turkey flatly denied several such requests on the pretext that the military vessels were too large. Moreover, Turkey proposed the creation of a regional security framework involving Turkey, Russia, Georgia, Armenia, and Azerbaijan, that left out a NATO role. More blatantly, Turkey has failed to participate in the Western economic sanctions imposed on Russia during the recent Ukraine crisis.
Dissonance exists also with regards to China. While the US fears the rise of China, Turkey sees this country as a potential economic partner and not as a problem. It held military exercises with China. Ankara even considered purchasing anti-aircraft systems from Beijing, an incredibly brazen position for a NATO member!
It is not clear why Washington puts up with such Turkish behavior. The Obama administration seems to be unable to call a spade a spade. It refuses to acknowledge that Turkey is a Trojan horse in NATO, and that Ankara undermines American interests in the Middle East and elsewhere.
Posted by Steve Lieblich at 12:14 pm