ISIS reaches out to Egyptian insurgents 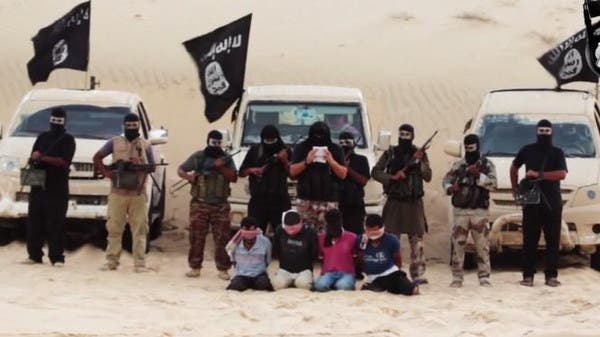 The Islamic State of Iraq and Syria (ISIS) called on insurgents in Egypt's Sinai Peninsula on Monday to press ahead with attacks against Egyptian security forces and continue beheadings. (Photo courtesy: Youtube)

The Islamic State of Iraq and Syria (ISIS) called on insurgents in Egypt's Sinai Peninsula on Monday to press ahead with attacks against Egyptian security forces and continue beheadings, an announcement likely to deepen concerns over ties between the militant groups.


"Rig the roads with explosives for them. Attack their bases. Raid their homes. Cut off their heads. Do not let them feel secure," ISIS spokesman Abu Muhammad al-Adnani said in a statement released online.

Adnani also called on supporters to kill citizens of countries taking part in the U.S.-led anti-militant coalition by any available means.


"If you can kill a disbelieving American or European -- especially the spiteful and filthy French -- or an Australian, or a Canadian... including the citizens of the countries that entered into a coalition against the Islamic State, then rely upon Allah, and kill him..." ...

The United States and France are carrying out air strikes against IS targets across Iraq and are seeking to build an international coalition against a group increasingly perceived as a global threat.

Ajnad Misr, or Soldiers of Egypt, which claimed previous attacks on police, said in a statement posted late Sunday on its Twitter account and on a militant website.

The group said it used an explosive device on "officers of the criminal apparatus" as part of its campaign against security forces.

It said the attacks will not stop until "the ruling tyrants fall and God's Shariah is established."
Posted by Steve Lieblich at 6:53 am