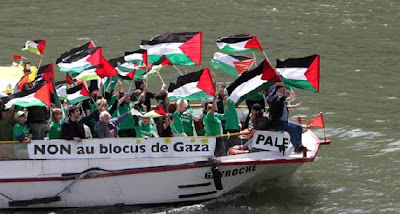 From Middle east Affairs Information Center, 30 May 2010, by Crethi Plethi:

According to a Foreign Ministry press release on Sunday [may 30], Deputy Foreign Minister Danny Ayalon criticized the effort [the aid flotilla], saying anti-Semitic chants voiced by the activists on board earlier in the day showed the “real motivation” for the campaign, which he termed an “armada of hate.”

Participants on the flotilla were recorded shouting “Khaybar Khaybar ya yahud, Jaish Muhammad saya’ud,” which means “Jews, remember Khyabar, the army of Mohammed is returning.”

This cry relates to an event in the seventh century when Muslims massacred and expelled Jews from the town of Khaybar, in modern-day Saudi Arabia.

“Israel condemns the anti-Semitic chants that were publicized this morning,” Ayalon said. “This amply demonstrates that many are not against a particular policy of the Israeli government, but have very real and dangerous hatred for Jews and the Jewish State.”

He further noted that “the main organizer of the flotilla is an extremist Islamic organization with ties to Hamas and global Jihad and it is unfortunate that there are those who are duped into thinking that this exercise has anything to do with humanitarianism or human rights.”

...Deputy FM Ayalon referred to the boycott of Israeli products by the Palestinian Authority, and stated that "After Israel declared its acceptance of the two-state solution, froze construction and removed roadblocks, the Palestinians are continuing their incitement against Israel. This is a rejection of mutual trust. It is impossible to talk peace on the one hand, while continuing with incitement on the other.”
Posted by Steve Lieblich at 11:00 am

I think we are beginning to quickly realize that the Freedom Flotilla II's intentions are not to provide aid to Gaza, and Israel has every right to protect themselves. I would like to invite you to check out Prevent the IHH Flotilla Towards GazaGet Started http://www.facebook.com/pages/Prevent-the-IHH-Flotilla-Towards-Gaza/117646254988615