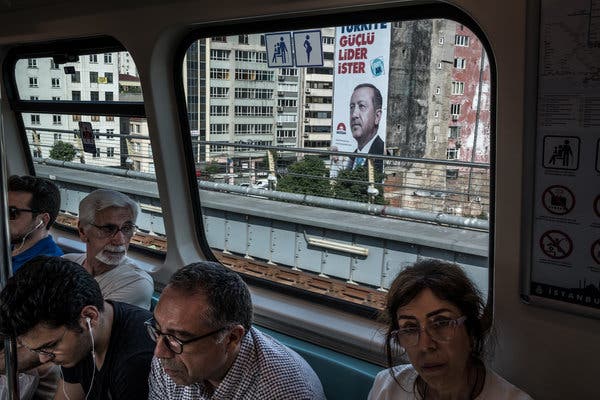 A commuter train in Istanbul passes an election poster for President Recep Tayyip Erdogan last June. Mr. Erdogan won re-election with greater powers, but the economy has faltered since then.

ISTANBUL — For 17 years, President Recep Tayyip Erdogan won elections by offering voters a vision of restoring the glories of Turkey’s Ottoman past. ...Last year, the economy wobbled and the lira plunged soon after he won re-election with even greater powers. As cronyism and authoritarianism seep deeper into his administration, Turks are voting differently — this time with their feet.

They are leaving the country in droves and taking talent and capital with them in a way that indicates a broad and alarming loss of confidence in Mr. Erdogan’s vision, according to government statistics and analysts.

In the last two to three years, not only have students and academics fled the country, but also entrepreneurs, business people, and thousands of wealthy individuals who are selling everything and moving their families and their money abroad.

More than a quarter of a million Turks emigrated in 2017, according to the Turkish Institute of Statistics, an increase of 42 percent over 2016, when nearly 178,000 citizens left the country.

Turkey has seen waves of students and teachers leave before, but this exodus looks like a more permanent reordering of the society and threatens to set Turkey back decades, said Ibrahim Sirkeci, director of transnational studies at Regent’s University in London, and other analysts.

The flight of people, talent and capital is being driven by a powerful combination of factors that have come to define life under Mr. Erdogan and that his opponents increasingly despair is here to stay.

They include fear of political persecution, terrorism, a deepening distrust of the judiciary and the arbitrariness of the rule of law, and a deteriorating business climate, accelerated by worries that Mr. Erdogan is unsoundly manipulating management of the economy to benefit himself and his inner circle.

...Mr. Erdogan has tried to make Turkey more conservative and religious, with a growing middle class and a tight circle of elites who are especially beholden to him for their economic success.

The flight of capital and talent is the result of this conscious effort by Mr. Erdogan to transform the society, said Bekir Agirdir, director of the Konda polling company.

...Ilker Birbil, a mathematician who faces charges for signing the peace petition and left Turkey to take up a position at Erasmus University Rotterdam in the Netherlands, warned that the country was losing people permanently.

...“People who are leaving do not want to come back,” Mr. Birbil said, citing the polarized political climate in the country. “This is alarming for Turkey.”

“I have received so many emails from students and friends who are trying to get out of Turkey,” he said.

Students are despairing of change partly because they have grown up with Mr. Erdogan in power for 17 years, said Erhan Erkut, a founder of MEF University in Istanbul, which teaches innovation and entrepreneurship.

“This is the only government they have seen, they do not know there is another possibility,” he said.

Families are setting up businesses abroad for the next generation to inherit, said Mr. Sirkeci of Regent’s University, adding that many students at his private university fell into that category.

At least 12,000 of Turkey’s millionaires — around 12 percent of the country’s wealthy class — moved their assets out of the country in 2016 and 2017, according to the Global Wealth Migration Review, an annual report produced by AfrAsia Bank.

Most of them moved to Europe or the United Arab Emirates, the report said. Turkey’s largest business center, Istanbul, was listed among the top seven cities worldwide experiencing an exodus of wealthy people.

“If one looks at any major country collapse in history, it is normally preceded by a migration of wealthy people away from that country,” the report said.

...“Billions of dollars have fled Turkey in the last couple of years, especially after the coup attempt when people started to feel threatened,” said Mehmet Gun, the owner of a law firm in Istanbul...
Posted by Steve Lieblich at 1:50 pm