The Arab oil era is over

As the Gulf states are left with no money to spend and are experiencing internal shocks, the era of destructive Arab power is coming to an end; the Israeli mind and innovation era, on the other hand, is just beginning.

The most dramatic news in 2014 almost went unnoticed: The United States lifted the restrictions on American oil exports, and as of the first day of the new year it has begun exporting oil to the world.

No one believed this would happen so fast, but the US is already the world's biggest oil manufacturer, bigger than Saudi Arabia, thanks to the oil shale technology which changed the world of energy.

This means that oil prices will continue to drop, as the US is already competing against other manufacturers. As a result, Russia will be crushed, Saudi Arabia and the rest of the Gulf states will fall flat on their face, the cartel will collapse, and all the dictatorships which were mainly based on oil – like Iran – will face a gloomy future.

At the same time, democracies like Canada, Brazil, Mexico, Nigeria and even little Israel will enter the market. 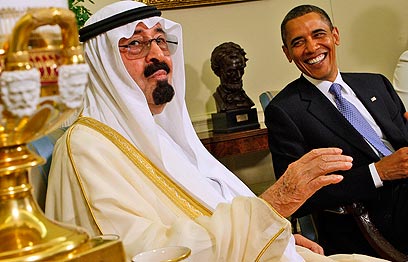 The Arab oil era is over, and so is the destructive power of the Persian Gulf's oil dictatorships.

These dictatorships have disgracefully controlled the failing Europe: Buying politicians, bribing companies, taking over the economy and gaining political power which was also used against Israel.

...The signs of the drop in Arab power can already be seen. Twenty-two Arab states made a huge effort last week to pass an anti-Israel resolution at the United Nations Security Council, but failed. The US was undeterred by them, and so were strong Western countries. It's true that France and Luxemburg are still controlled by the Arab capital, or think they are, but they will also realize that the era of Arab money is over.

...And what about the rich Gulf states, like Qatar? They are deluding themselves that someone will be interested in them if they don’t have oil. Some are even toying with the idea of tourism. Well, if there is no oil, no one will want to come there at all, and the sand will once again cover the towers rising in the air which they have built.

And Mahmoud Abbas' Palestinian Authority? Well, no one in the Gulf actually donated money to this entity even before the crisis, although there were always festive declarations.

As the year 2015 begins, we are facing a new world: A world of a revolution of information, mind, personal strength, innovation and inventions. And in this world, Israel is a real princess.  and the global and Israeli mind era begins. It's a fact that countries which wouldn't dare approach us in the past – because of the Arab extortion – are now doing so hastily, as if to make up for the lost time of so many years.

Israel is becoming a close friend of countries which were distant in the past but are close today, like India, Japan, China and South Korea. They too understand that those who are not innovative and lack a creative mind will just not be. And in this field, Israel has a lot to offer them, just like they have a lot to offer in return.