...The UN's idea of combating racism and xenophobia is to encourage more of it. 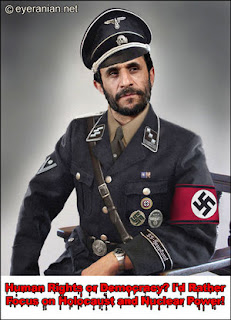 (picture from Hyscience)
Ahmadinejad was the very first speaker as the substantive session opened. Handed a global megaphone by the UN, out flowed unadulterated hate speech.

The phenomenon was astonishing. The UN provided a platform for a virulent antisemite on the anniversary of the birth of Adolf Hitler. In the name of fighting intolerance, they translated his words into six languages and broadcast them around the world...
... this is what he said.

He began by denying the Holocaust: The "Zionist regime" had been created "on the pretext of Jewish sufferings and the ambiguous and dubious question of holocaust."

And he continued with a genocidal agenda: "the egoist and uncivilized Zionism have been able to deeply penetrate into their political and economic structure including their legislation, mass media, companies, financial systems, and their security and intelligence agencies. They have imposed their domination to the extent that nothing can be done against their will. As long as they are at the helm of power, justice will never prevail in the world. It is time the ideal of Zionism, which is the paragon of racism, to be broken. The world Zionism personifies racism that falsely resorts to religion and abuse religious sentiments to hide their hatred and ugly faces."

As he spoke, the European Union countries that had not withdrawn earlier finally stood up and walked out. But they didn't really understand what had just happened at all, for when he was finished, all but the Czech Republic went right back in.

Ten countries have now boycotted this second Durban hatefest: Canada, Israel, the United States, Italy, Australia, New Zealand, the Netherlands, Germany, Poland and the Czech Republic.
The rest of the world remains inside, providing legitimacy to a forum for hatemongering. They are under the impression that there is no lasting damage being done here either to the credibility of the institutional host or to the cause of protecting human rights. They are wrong.

And the real victims of human rights are all the poorer for it.
Posted by Steve Lieblich at 8:55 am