JERUSALEM (AFP) - Retired senior officers told Israelis on Saturday to prepare "rocket rooms" as protection against a rain of missiles expected to be fired at the Jewish state in any future conflict. 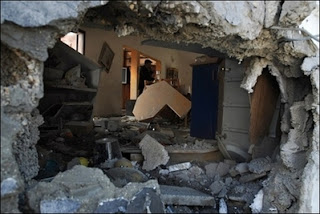 A house in the Israeli town of Sderot that was hit by a rocket fired from the Gaza Strip. Retired senior officers told Israelis to prepare "rocket rooms" as protection against a rain of missiles expected to be fired at the Jewish state in any future conflict.
(AFP/File/David Buimovitch)
...retired general Udi Shani said: "The next war will see a massive use of ballistic weapons against the whole of Israeli territory." Shani was tasked recently with drawing up a report on the way the military authorities operated during Israel's 2006 summer war against Hezbollah in Lebanon. During that conflict thousands of rockets hit Israel, but were limited to the north of the country from where hundreds of thousands of people were evacuated.
The character of war has changed, said the general. "Strikes to the rear must now be taken into account -- that is what will come and we must prepare in a totally different way for this eventuality," he said.
Another reserve officer, Colonel Yehiel Kuperstein, added: "Protection of civilians must today be assured even inside their homes. "There is no absolute protection, but the best possible sort is that of a room able to provide shelter" inside houses, he said, evoking the norms in force in Israel for several years which envisage each apartment having a room with reinforced walls able to serve as a shelter.
....The authorities have distributed a brochure in six languages with advice on what to do, particularly in the event of missile attacks, as well as launching a campaign on radio and television....
Posted by Steve Lieblich at 8:30 am

Email ThisBlogThis!Share to TwitterShare to FacebookShare to Pinterest
Labels: Gaza