Benjamin B. Ferencz Continues His Fight for Justice at 98 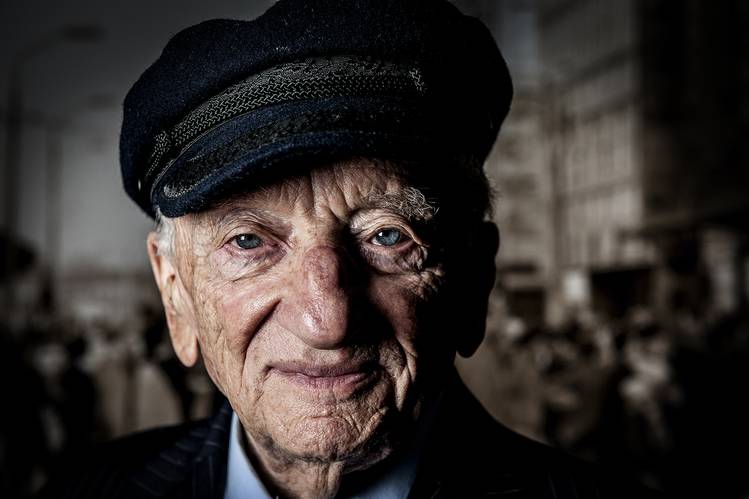 Benjamin B. Ferencz, shown here in 2014, is the last surviving prosecutor of the Nuremberg Trials. PHOTO: ROBIN UTRECHT

He dug up bodies of Jews buried in shallow graves, unearthing them however he could, the souls of those killed by Nazis during World War II. Sometimes by hand, sometimes with shovels, sometimes with the help of rope and the torque of a military vehicle.

In the days after the war, he toured concentration camps for the U.S. military, witnessing bodies in crematoriums stacked like cordwood and surviving inmates gnawing on garbage.

Benjamin B. Ferencz, a Jewish man from New York, had to suppress his horror to accomplish his mission: to collect evidence to convict Nazis of war crimes—an experience that left him with an unshakable purpose that would guide the rest of his life.

“I couldn’t possibly do the job if I let it get to me at that time,” Mr. Ferencz says in an interview at his New Rochelle, N.Y. home. “It’s remained with me ever since.” 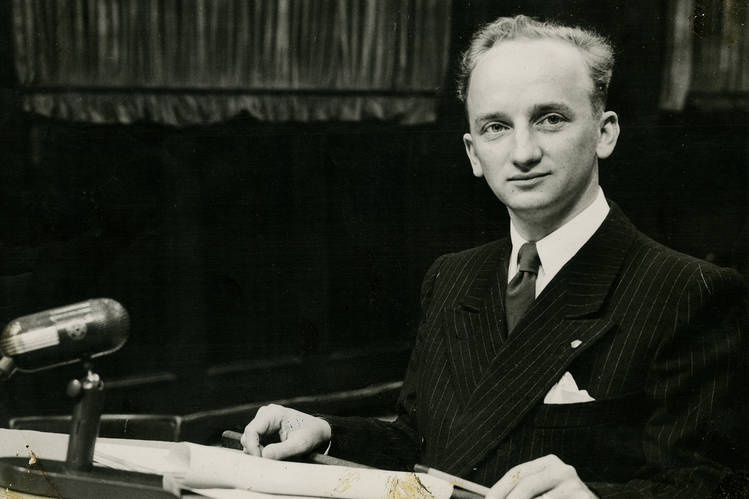 Mr. Ferencz, 98 years old, is the last surviving prosecutor of the Nuremberg Trials. His story is the subject of “Prosecuting Evil,” a documentary to be released later this month at Cinema Village in New York, with a wider release to follow. It has screened for Jewish audiences at New York’s Temple Emanu-El Streicker Center and in synagogues across the U.S., and for the general public at film festivals, including last year’s Toronto International Film Festival.

The documentary follows Mr. Ferencz’s life, his pursuit of justice and his decades of work building the underlying legal principles for international criminal law. Barry Avrich, who directed and produced “Prosecuting Evil,” calls the film the most important and fulfilling work of his career. “Ben should be recognized globally as a historical icon,” he says.


Much of the roughly 80-minute documentary is built from interviews with Mr. Ferencz about his life and the trial, accompanied by archival photos and video footage of Germany during and after the war. Others interviewed for the film, including Mr. Ferencz’s son Don, legal analysts and government officials, provide the context of Mr. Ferencz’s legacy in international criminal justice.

Mr. Ferencz was instrumental in the development of the International Criminal Court at The Hague, where individuals face prosecution for genocide, war crimes or crimes of aggression.

“This is one person, one great man in history who...continues to show that this world can be better,” says Fatou Bensouda, an international criminal law prosecutor at the court, in the film.

Those days in the concentration camps fueled Mr. Ferencz’s ongoing fight for the use of jurisprudence in mitigating international conflicts, decrying war as genocidal.

“War will take otherwise decent people and turn them into murderous killers,” Mr. Ferencz says. “No war is won; it’s not a ballgame.”

Born in Transylvania in 1920, Mr. Ferencz came to the U.S. as an infant with his sister and parents, fleeing persecution to settle in the Hell’s Kitchen neighborhood of Manhattan. He spoke Yiddish at home and wasn’t initially admitted to public school, because he couldn’t speak English. But, according to the documentary, teachers believed he was gifted and he was admitted to Townsend Harris High School, which had a program that included an opportunity to attend the City College of New York.

Mr. Ferencz attended Harvard Law School, where he conducted research for criminologist Sheldon Glueck, who at the time was writing a book about war crimes. 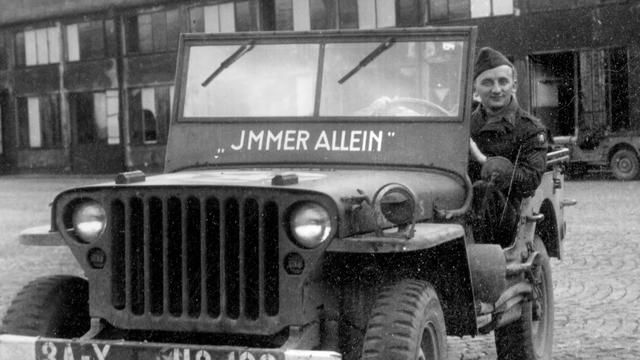 Mr. Ferencz graduated law school in 1943, after the U.S. entered the war. He enlisted that year in the U.S. Army as a private, and eventually rose to the rank of sergeant, having fought as an antiaircraft artillery man in the European theater.

As Nazi atrocities were being uncovered, Mr. Ferencz received his final Army assignment: He became a war-crimes investigator, entering the concentration camps to gather evidence.

Mr. Ferencz says he prepared himself for the task as if he was personally directed by Gen. George S. Patton to enter the camps. “I couldn’t afford to be stopped by anything I saw,” he says.

Describing in the film what he saw in the camps, Mr. Ferencz stops, swallows hard and holds back tears. “It becomes vivid again,” he says. “I did my job, because that was my job.” 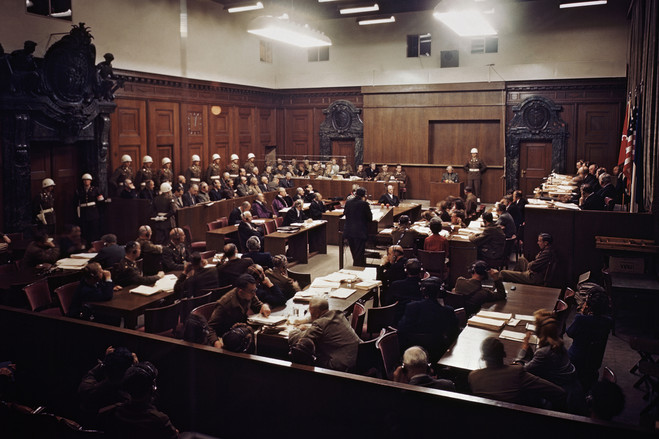 A general view of the trial of Nazi war criminals in Nuremberg in 1946. PHOTO: BETTMANN ARCHIVE/GETTY IMAGES

The Nuremberg Trials, as the documentary portrays in depth, were also a formative experience for him.

When he returned to New York after the war, he was recruited by Gen. Telford Taylor, then chief prosecutor of the Nuremberg Trials, to return to Germany and gather more evidence. Mr. Ferencz and his staff discovered dossiers of the Einsatzgruppen, Nazi death squads who murdered more than a million Jews, Roma, gay people and political opponents in Eastern Europe.

Mr. Taylor then assigned Mr. Ferencz to lead the prosecution of the Einsatzgruppen case, one of the dozen subsequent war-crimes trials held at Nuremberg and what Mr. Ferencz described as the biggest murder trial in human history. The defendants were Nazi officers and Gestapo members who had carried out the murders; Otto Ohlendorf, the chief defendant, was commander of one of the death squads.

At age 27, it was Mr. Ferencz’s first trial. Barely over 5 feet tall, he stood on a stack of books to deliver the opening statement—the moment is captured in video footage in the film—in which he said: “Vengeance is not our goal, nor do we seek merely a just retribution...the case we present is a plea of humanity to law.”

Mr. Ohlendorf, who had a wife and five children, was executed by hanging. “Aside from the fact that he killed 90,000 Jews, I’m sure he was quite a gentleman,” Mr. Ferencz says in the film, reflecting on the man’s character.

After the trial, Mr. Ferencz took over the process of recovering the heirless, unclaimed assets of murdered Jews. In the years following the Nuremberg prosecutions, Mr. Ferencz returned to New York and practiced law, eventually becoming partners with Mr. Taylor and taking what he called “hopeless cases” that had a moral element he could pursue. 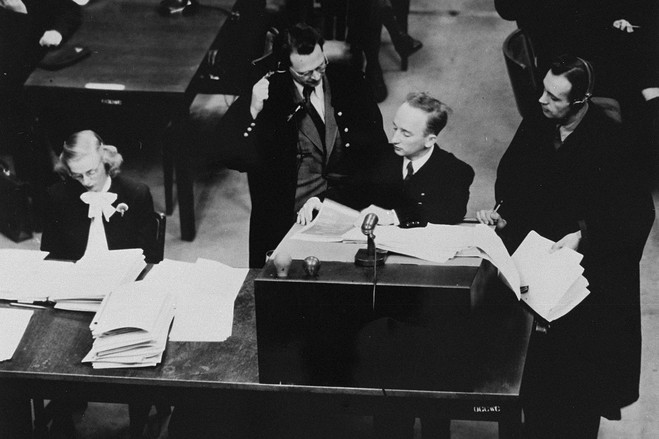 Mr. Avrich says when he showed Mr. Ferencz a rough cut of the film, Mr. Ferencz broke down crying and told him, “it’s all I need.”

Mr. Ferencz hopes the attention, including through the film, will help continue the fight for rule of law. It took decades to create the International Criminal Court, but he never gave up, even when people he trusted told him to stop trying, he says.

He says he seeks a more peaceful world for younger people because their lives are at stake.

“If we are repudiating law as an instrument of policy, you’re dooming the young people of the forthcoming generation—if there is one,” he says.

Follow this link to see a 2-minute trailer of the documentary
Posted by Steve Lieblich at 2:06 pm