No Difference Between Fatah and Hamas

From the Gatestone Institute, 22 January 2018, by Bassam Tawil, a Muslim based in the Middle East.

Is there any difference between the "moderate" Fatah faction headed by Mahmoud Abbas and Hamas?

In recent weeks, Fatah, which is often described by Westerners as the "moderate" and "pragmatic" Palestinian faction, has escalated its rhetorical attacks against Israel and the US to a point where one can no longer distinguish between its rhetoric and that of Hamas.

Like Hamas, Abbas's Fatah regularly glorifies terrorists and encourages Palestinians to take them as role models. This is the very Fatah that is supposed to be Israel's peace partner and whose leader, Abbas, claims that he is still committed to the "two-state solution." 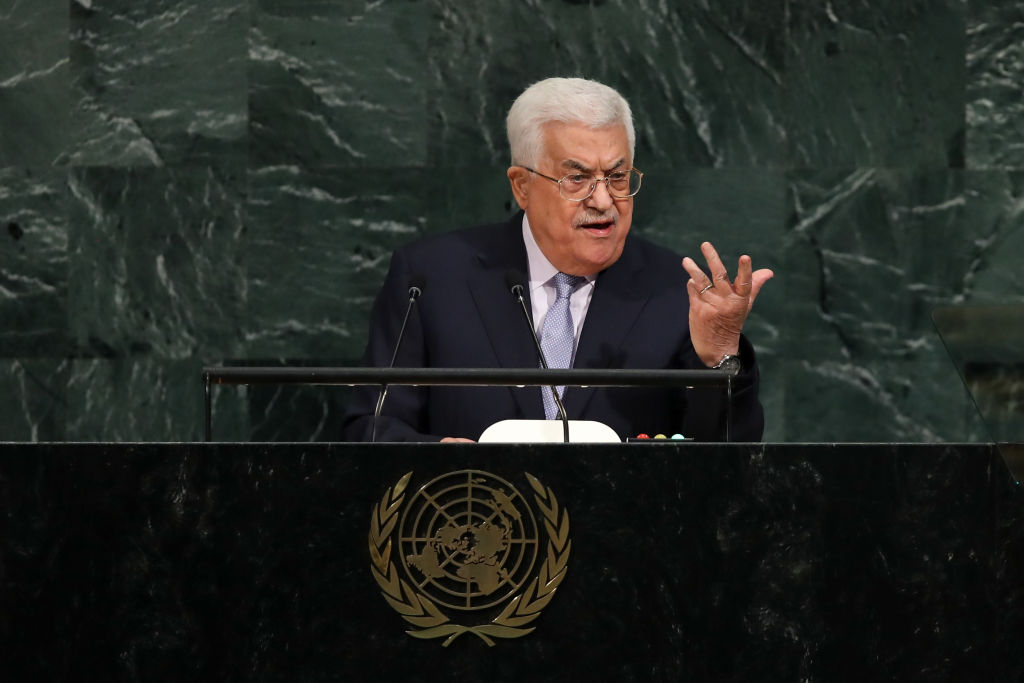 Mahmoud Abbas, President of the Palestinian Authority and chairman of the Fatah faction. (Photo by Drew Angerer/Getty Images)

Although Jarrar is believed to be a member of Hamas, Fatah was quick to publish posters depicting him as one of its "martyrs." In one of the posters, Fatah described the slain terrorist as a "hero" and "martyr of Jerusalem."
Fatah's student faction at Al-Quds University also confirmed that Jarrar was one of its members. In a statement published hours after the terrorist was killed, the Fatah Shabiba [Youth] Movement at Al-Quds University boasted that he was "one of our prominent leaders and a member of our administrative body."

By heaping praise on the terrorist and endorsing him as one of its "heroes" and "martyrs," Abbas's Fatah is sending a message to Palestinians that murdering a rabbi and father of six is a noble act. By describing the terrorist as a "martyr of Jerusalem," Fatah is also implying that Rabbi Shevach was murdered in response to President Donald Trump's announcement from last December in which he recognized Jerusalem as Israel's capital.

Since Trump's announcement, Fatah has been spearheading a new Palestinian campaign of incitement against Israel and the US. Fatah leaders, who often appear in Western media outlets as "moderate" and "pragmatic" figures, have since been urging Palestinians to take to the streets to protest against Israel and the US. The Fatah leaders employ the same rhetoric used by their colleagues in Hamas to such an extent, that sometimes it seems as if Fatah and Hamas are competing to show which party hates Israel and the US more.

Consider, for example, the following remarks by Fatah official Samer Abu Khalil, who accused Trump of giving Israel a "license" to kill Palestinians:

"President Trump's announcement on Jerusalem gave Israel a license to kill Palestinians. Trump has committed a crime against the Palestinians, who will never give up their lands and holy sites."

Referring to Trump's purported plan for peace in the Middle East, the senior Fatah official added: "The Palestinians won't allow this conspiracy to pass. The era of peace is over. Now, the era of resistance has begun". "Resistance" is a Palestinian euphemism for terrorism against Israel.

Similarly, here is what senior Hamas official Salah Arouri had to say about Trump's announcement on Jerusalem: "This is a criminal and bad announcement. Trump is in collusion with the Zionist entity."

Abdel Jaber Fukaha, a senior Hamas official, recently called for escalating Palestinian and Arab protests against Trump's announcement by staging violent demonstrations in the West Bank and Gaza Strip. Fukaha also repeated calls by some Fatah leaders to the Arab countries to cut off their ties with the US and any country that recognizes Jerusalem as Israel's capital.

Fatah issued a similar call on January 19. In a statement published in Ramallah, Fatah called on Palestinians to "escalate the popular and comprehensive resistance" against Israel. Fatah also called on Palestinians to "turn the lives of Jewish settlers into hell." This call is a clear message to Palestinians to launch more terror attacks like the one that resulted in the murder of Rabbi Shevach. This, in fact, is the real "license to kill" that Fatah has been talking about. It's not Trump who gave Israel a "license to kill." The real license is being issued here by Abbas's Fatah.

Moreover, there are growing signs that Fatah and Hamas were coordinating their policies regarding Vice President Mike Pence's visit to the Middle East. Hours before Pence's arrival in Israel, Fatah and Hamas issued separate statements calling on Palestinians to boycott the vice president. Again, the language used by the two Palestinian groups is strikingly identical.

Hamas spokesman Fawzi Barhoum said that Pence was "unwelcome in Palestine," adding that there was no "justification for any Palestinian official to meet with Pence and called on Palestinians to "thwart Israeli-American schemes directed against the Palestinians and their rights."

In Ramallah, Fatah spokesman Osama Qawassmeh echoed the Hamas position verbatim (although he also used harsher language): "Pence is unwelcome. Fatah and the Palestinian people reject Pence's visit and we call on our Arab brothers to boycott him." The Fatah official, who is closely associated with Abbas, went on to accuse Pence of being a "racist" and "extremist."

Such examples, which showcase how hard it has become to distinguish between Fatah and Hamas, can easily be multiplied. Abbas himself is also beginning to sound like a Hamas leader. His recent speech, in which he described Israel as a "colonial project that has nothing to do with Jews," sounds as if it were taken directly from the mouth of Hamas leader Mahmoud Zahar.

Make no mistake about it, however; neither Fatah nor Abbas woke up one morning and decided to change its position towards Israel and the US.

For those who have been following the rhetoric and actions of Abbas and his Fatah faction, the extremist anti-Israel and anti-US views and remarks do not come as a surprise. The glorification of terrorists and the denial of Jewish rights and history have always been a main pillar of the ideology of Abbas and Fatah. Abbas and Fatah have worked hard over the past two decades to create the false impression that they differ from Hamas. It now appears that the jig is up: their true colors are showing for all to see.

Indeed, Trump's announcement helped to expose the true sentiments of Abbas and Fatah. It is all out in the open -- Fatah and Hamas belong to the same school of thought: both advocate violence; both propagate the same hostility towards Israel and the US, and both seek the destruction of Israel and the murder of Jews -- as many as possible.
Posted by Steve Lieblich at 2:21 pm