HUGE HACK EXPOSES SOROS’S WAR ON ISRAEL
... hackers leaked reams of confidential reports from the Open Society Foundations, hedge-fund billionaire George Soros’s ostensible charitable network ...Soros, who is of Hungarian Jewish origin, is a major supporter of the Democratic Party and a dogged opponent of the state of Israel, or—at the very least—of the policies and values embodied by its elected governments.

The leaks shed new light on the intensity of Soros’s animus against the Jewish state.
One of the Open Society Foundations’ aims was to “challeng[e] Israel’s racist and anti-democratic policies” and subvert its image as a democracy in the international arena. 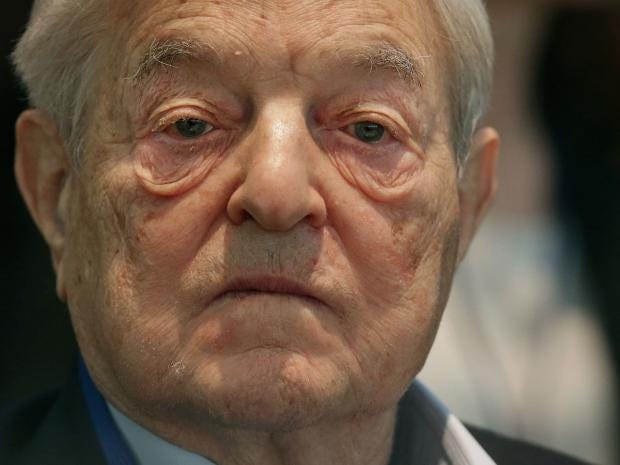 One way Soros’s outfit did that was to funnel funds to highly adversarial Israel-based organizations.

Since 2001 the largest total, almost $2.7 million, has gone to the Israeli Arab NGO Adalah. As NGO Monitor details, Adalah vilifies Israel as a “colonial enterprise” and “apartheid state,” charges it with “war crimes,” and calls for its international isolation.

Another $1 million has gone to another Israeli Arab NGO, the I’lam Media Center. During the 2014 Gaza War, I’lam expressed its loyalty to its country—a haven for its Arab minority—by calling on the notoriously anti-Israeli UN Human Rights Council to “[c]ondemn the deliberate, systematic and widespread targeting of Palestinian civilians” and set up an “international commission of inquiry” to criminalize Israel for its war against massive Hamas rocket fire.

Some of the funding to these and similar NGOs was channeled through the New Israel Fund. ...the NIF ...funds organizations “that are active in international and divisive campaigns that contribute to…the demonization and delegitimization of Israel.” As well as being a conduit for the Soros funds, NIF itself has received a total of $837,000 of them.

“Even more troubling,” as Liel Leibovitz notes on Tablet, “the documents repeatedly indicate that the network actively tried to conceal its engagements in Israel and the Palestinian territories.” As part of what NGO monitor calls “the secrecy and lack of transparency inherent in the [Open Society Foundations’] activities,” one document states:

For a variety of reasons, we wanted to construct a diversified portfolio of grants dealing with Israel and Palestine…and in all cases to maintain a low profile and relative distance—particularly on the advocacy front.

That has, of course, gotten increasingly difficult in a world of hackers and mysterious websites.

In seeking to blacken Israel’s name, Soros’s network had an eye for what it saw as golden opportunities. One, as stated in a report by the network, was “a particular shift in political dynamics particularly in the US reflected by the publication of the Walt and Mearsheimer article ‘The Israel Lobby’ [denounced as antisemitic] in Spring 2006.”

“Another encouraging shift,” as Leibovitz notes, was “the rise of the international movement to boycott Israel.” As the same Soros-network report stated:

A number of factors make this a good moment to review this portfolio, including some new or improved opportunities we may choose to exploit. In recent years there’s been heightened international solidarity around Palestinians’ rights, the rise of the Boycott, Divestment, and Sanctions (BDS) movement and other economic levers, and increased use and traction of arts and culture by Palestinians as a means to raise awareness of violations and the impact of the conflict.”

It translates into: make use of anything—including the BDS movement, whose explicit aim is to destroy Israel—to weaken, harass, undermine, and defame the state of Israel.
Soros, himself, said that he


“grew up in a Jewish, anti-Semitic home,” and that his parents were “uncomfortable with their religious roots.” They even changed their name from Shwartz to Soros in 1936 to disassociate themselves from the Jewish community.

That Soros has also acknowledged being neither “a Zionist, nor…a practicing Jew,” nor very “engaged in Jewish affairs,” is one thing. That he works to drag the Jewish state into oblivion along with him is, of course, quite another...
Posted by Steve Lieblich at 8:02 am