Lebanon is responsible for Hezbollah


Alongside Nasrallah’s harsh words, we should also pay attention to the recent comments made by Lebanese President Michel Aoun, which make it clear that Hezbollah and the government of Lebanon are one and the same.

In recent weeks, Hezbollah Secretary-General Hassan Nasrallah’s threats have become more frequent and more aggressive. Some people say, as implied in IDF Chief of Staff Gadi Eisenkot’s comments Wednesday, that the threats reflect distress rather than self-confidence. I am not so sure about that.

After years of rolling in the Syrian swamp, Hezbollah’s involvement in the war in Syria is expected to increasingly diminish. The fact that the organization is identified with the “winning side” will only give it more confidence in its abilities to shift the fighting towards its main enemy—Israel.

Alongside Nasrallah’s harsh words, we should also pay attention to the recent comments made by Lebanese President Michel Aoun, who reiterated that Hezbollah was part of the power protecting Lebanon from Israel. Although it isn’t new, this statement only strengthens what should have been clear for years—that Hezbollah and the government of Lebanon are one and the same. 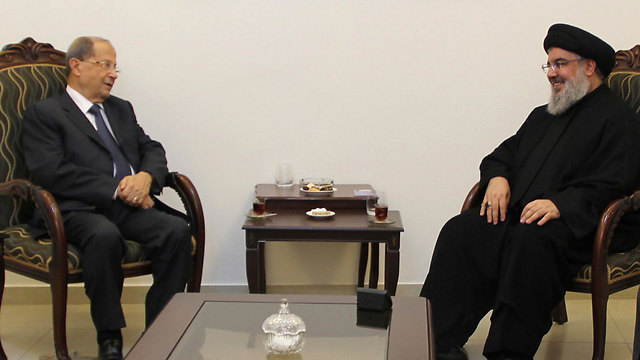 Both Western countries and Israel have been erring for years in understanding the reality in Lebanon. According to the common view, the political establishment in that country is divided into two camps. On the one side, the “good guys” camp, which includes the majority of Christians, Druze and Sunnis and represents pragmatism, moderation, a Western culture and reliance on Saudi, American and French aid. On the other side, the “bad boys” camp, which is led by Hezbollah with the support of Syria and Iran.

If this current state of affairs is true, the West should try to bolster the “good guys” by providing economic aid, building infrastructures and strengthening the army. The problem is that this description is naïve and very far from the truth and from reality.

The truth is that while there are indeed two camps in Lebanon, there is an unwritten agreement between them that each camp will use its relative advantage for a joint purpose. The “good guys” camp will present the beautiful face of Lebanon—a country with democratic institutions, a Francophile culture and a free economy—thereby obtaining political, economic and military support for the country. In return, the other camp, led by Hezbollah, will serve as the state’s significant military force, will be defined by the government as Lebanon’s defender against the Israeli aggression and will be the only one to decide if it will be quiet or noisy along the border with Israel.

In the Second Lebanon War, Israel fell into the Lebanese trap and played into the hands of the Lebanese government. Israel fought only against Hezbollah, without getting the Lebanese government, the Lebanese army and the country infrastructures involved in the battle. What will happen if we run the third Lebanon war the same way? The outcome will likely be much worse than the results of the previous war. Israel can only defeat Hezbollah at an unbearable cost to the Israeli home front.

The conclusion, therefore, should be clear. If fire is opened at Israel from Lebanese territory, Israel should declare war on the State of Lebanon. There is no one in the world who wants to see Lebanon destroyed—neither the Syrians and the Iranians on the one side, nor the West and Saudi Arabia on the other side. Hezbollah doesn’t want that either. A war against Lebanon, which will inflict heavy damage on all of the country’s infrastructures, will spark an international outcry for a ceasefire after three days, rather than after 33 days like in the Second Lebanon War. It is only from a really short war that Israel will be able to emerge victorious and without serious damage to its home front.

It’s important to remember, therefore, and to remind the world not of Nasrallah’s statements, but rather of the Lebanese president’s statements. Once the fighting breaks out, it will be too late to explain the new strategy. The diplomatic battle should be waged before, not during, a war.
Posted by Steve Lieblich at 6:10 am