From Asia Times, 11 Oct 2016, By Edouard Cukierman, Founding and Managing Partner of Catalyst:

Since its establishment 68 years ago, Israel has become a powerhouse for innovation, start-ups and high-tech. We have witnessed significant growth in the blooming Israeli start-up ecosystem throughout the years since its humble beginnings a few decades ago. On the other side of the globe, China has been going through its own transformation: over the past 30 years, China has become a super nation with a 20% share in the world’s GDP. Today, more than ever in its long history, China is looking to impact and cooperate outside the country’s physical borders.

Although still a relatively newly development, it seems that the economic relations between Israel and China have all the potential for a strong, successful and long-lasting business connection.

Historically, the interest in Israeli technology came mainly from the US and Europe; a vast majority of Israeli companies and technologies were acquired by US and European players.
However, over the last decade, we see a growing trend of emerging market companies, especially from China, acquiring Israeli technologies. Over the past 4 years alone, Chinese investors have invested over US$15 billion in Israeli companies. 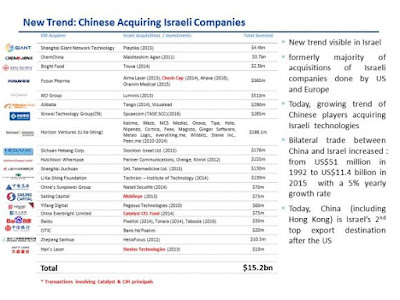 List of Israeli acquisitions by Chinese investors as announced on public media.

Big Chinese conglomerates and leading companies such as Fosun, ChemChina, Brightfood, Horzion Ventures and China Everbright have invested significant capital and resources into Israeli companies and many others are following their example.

Chinese investors have discovered the enormous potential of the Israeli high-tech industry across a wide variety of sectors and have quickly began investing and acquiring a number of Israeli companies to help along their own innovation needs. It seems that China discovered Israel as an innovation hub and source for leading technology – and Israeli companies welcome the vast market opportunities China has to offer with open arms and investment rounds for local players to come in.

With each year, we see more joint ventures blossoming from the Israeli-Chinese love story. To only name a few of the very recent transactions we witnessed and were part of: ChemChina invested US$3.7 billion in world’s biggest producer of generic crop protection products Israeli company Adama, Israeli diagnostics company Check-Cap completed a successful pre-IPO round with Fosun as the lead investor, Brightfood invested US$2.5 billion in Israel’s leading dairy producer Tnuva, the first Israel-China private equity Fund was established between Israeli firm Catalyst and China Everbright Limited, Israeli gaming company Playtika was acquired for US$4.4 billion by a consortium of Chinese investors and Baidu made a strategic investment into Taboola, a leading online discovery platform company.

We believe that the Chinese-Israeli economic alliance is here to stay. What we have witnessed over the last years is a mere beginning of a beautiful, long-lasting and mutually beneficial friendship.
Catalyst is very proud to be at the forefront of these developments. Catalyst established the first dedicated Israel-China Private Equity Fund together with its partners, China Everbright Limited (CEL). The Fund supports the long term growth of innovative mature Israeli companies and their entry into the Chinese market. In parallel, our investment bank, Cukierman & Co. Investment House, established a successful joint venture with our Shanghai-based partner Yafo Capital, focusing on Israeli-Chinese cross-border transactions. Our deep involvement and commitment to China is maybe illustrated best by choosing to organize our annual conference, the 16th GoforIsrael, in China – for the first time in its 15 year history the conference was held outside of Israel.

In the coming years, we hope to see these two ancient cultures, the Chinese and the Jewish, both dating back thousands of years, creating a robust and long term business partnership. We are very enthusiastic to see the synergy this alliance will create in the coming years.
Posted by Steve Lieblich at 9:38 am