Antisemites paid for Jeremy Corbyn to meet Assad in Syria 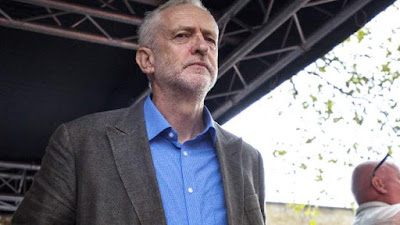 Jeremy Corbyn accepted a free trip to meet President Assad of Syria funded by the Palestinian lobbyists who organised an event this week at which Jews were blamed for the Holocaust.

The Labour leader was taking part in a stunt to mark Balfour day, the anniversary of the signing of a British declaration in 1917 supporting a Jewish home in Palestine.

Baroness Tonge, who chaired the meeting, resigned from the Liberal Democrats after an outcry over anti-semitic remarks made by audience members....

Lady Tonge accompanied Mr Corbyn on the PRC trip to Syria in 2009. Mr Corbyn used the visit to allege that “once again the Israeli tail wags the US dog”, an allegation popular with conspiracy theorists and antisemites.

Mr Corbyn was condemned yesterday by an expert on antisemitism for using “dangerous language”.

The PRC has a record of hosting events featuring hard line anti-Israel speakers, where incendiary remarks are made about Jews...

Israel has claimed that the organisation is affiliated to Hamas, a designated terrorist group...

Mr Corbyn recorded the trip in the Register of Members’ Financial Interests as being worth £1,300. He stated that the purpose was to visit refugee camps. The delegation of international parliamentarians was headed by the Conservative Lord Sheikh.

...Mr Corbyn wrote about the trip in the communist Morning Star newspaper. He said he had met a group of Palestinians on the anniversary of the date “when Arthur Balfour gave his infamous declaration of support for a Jewish state of Israel”. It seemed appropriate, he argued, that the Palestinians experienced another big disappointment that day in news from Washington.


“Once again the Israeli tail wags the US dog as [secretary of state] Hillary Clinton drops demands to even halt new settlements as the Netanyahu government pushes to continue its dismemberment of the West Bank,” he wrote.


Dave Rich, author of The Left’s Jewish Problem, told The Times yesterday: “This crass wording about Israel echoes conspiratorial ideas about Jews or Zionists controlling US foreign policy. Somebody who claims to oppose antisemitism should be able to recognise the dangers of using language like this.”

The PRC has a track record of provocative events.

Sir Gerald Kaufman, the veteran Labour MP, told one of the group’s gatherings in Parliament last year that “Jewish money” was influencing the Tories.

...Speakers at an event it organised in 2013 included Mr Corbyn and the Rev Stephen Sizer, a Church of England clergyman who later posted a link on Facebook suggesting Israel was behind the 9/11 attacks....

*Balfour Day, when the historic declaration is denounced, was marked by Nazi supporters in 1943 in Berlin, where the grand mufti of Jerusalem gave a speech venting his hatred of the Jews as well as the British for helping Zionists....
Posted by Steve Lieblich at 10:26 am