Khamenei’s Slant on WWII: Iran Must Not Go the Way of Germany and Japan 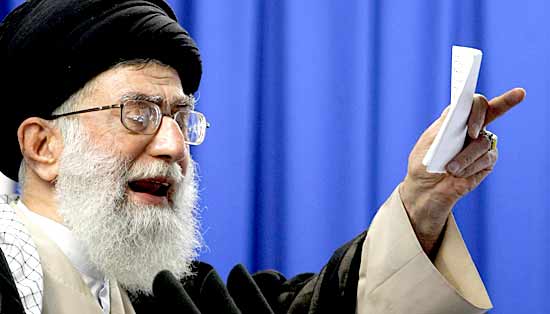 EXECUTIVE SUMMARY: In a speech last week to the Iran Revolutionary Guards Corps, Supreme Leader Ali Khamenei spoke of the outcome of World War II in revealing terms. In the context of a debate over the size of the Iranian military, he invoked the humiliation inflicted upon Germany and Japan by the US. Read against the background of Iran’s Holocaust denial, its exterminatory intent towards Israel, and its rejection of Western values, this invocation confirms Khamenei’s totalitarian interpretation of Islam. Iran is in open conflict with the West and with Saudi Arabia too. This raises questions about the facile assumptions of change underpinning the nuclear deal with Iran.

Speaking on September 18, 2016 before commanders of Iran's Revolutionary Guards Corps (IRGC), the Supreme Leader of Iran launched into a bitter polemic against Rafsanjani's call to invest more in the economy and less in military build-up. (Ref. MEMRI translation and analytical observations.) The IRGC, Khameini declared, is the key to the success of the revolutionary project. Deterrence can only be achieved if fear of Iran's raw power is instilled in the hearts of her enemies. Neither the JCPOA (the nuclear deal between Iran and the P5+1 powers) in itself, nor a shift in strategy to more civilian pursuits, can protect Iran. The revolution must be translated into military might.
At this point in the speech, Khameini offered a fascinating point of reference. Look, he suggested, at Germany and Japan at the end of World War II: forced into submission, humiliated, and required to disarm. He made no effort to hide his sympathy. As far as Khameini is concerned, the bad guys won and the good guys lost in 1945, and the time has come to overthrow the entire post-war dispensation.
This position is, after all, in line with Iran’s denial of the Holocaust (recall the caricature competition designed to denigrate and diminish it) and exterminatory stand towards Israel. It is not the personal quirk of Ahmadinejad, who was, in fact, just told by the Leader that he will not be allowed to run for president again this time. It is the position of Khamenei himself and of Khomeini before him: "Khatt al-Imam," the line of the Imam, the ultimate imperative of the revolutionary regime.
According to this line, Iran has a religious (or, rather, ideological) imperative to reject all Western mores. For this to be possible, the Revolution, even more than the State as such, must position itself as a strong military power in regional and global affairs. The alternative is unthinkable. The "values" the West and the US seek to impose include utterly base and noxious notions like homosexuality (with which Iran's present leaders are apparently obsessed). Military weakness would lead to moral weakness, a "cultural invasion," and the loss of all that Khameini and Khomeini have sought to establish.
Khameini told his audience that there are misguided souls in Iran who seek to negotiate with the US even as the Americans themselves seek a dialog with Iran on regional affairs (e.g., on Syria, Lebanon, Iraq and Yemen). He rejects this quest not only as poisonous for Iran, but as evidence that America is now a spent force.
With that American weakness in mind, the Iranian leadership is now openly calling for the total destruction of Wahhabism (read: the Saudi state). It makes this call while complaining, as did Foreign Minister Zarif in an op-ed at The New York Times, that "big money is being used to whitewash terrorism." This claim is, of course, extremely rich to anyone with even a smattering of knowledge about Iran’s behavior in recent years.
Iranian arrogance is thus on the rise in the post-deal era, and with it Iran’s hope of steadily undoing Israel and undermining regional and global stability until the true Imam or Mehdi appears on earth. Meanwhile, as Saudi Foreign Minister Adel Jubayr wrote in response to Zarif, it is Iran that remains at the top of the terror lists. It is Iran's ally in Syria, with the help of Iran's proxies in Lebanon, who is now engaging in unprecedented acts of carnage in Aleppo.
The Leader's extolling of military might is thus frightening to all in the region, even as Tehran tries to present itself as the voice of reason in the struggle against the Islamic State (Iran was quick to denounce the assassination in Amman this week of a Christian journalist who "insulted" the IS radicals).
There could be an opportunity here. Neither candidate for the US presidency seems to have bought into the strange notion, implicit (and at times explicit) in the positions taken by Obama and his inner circle, that Iran can serve as a useful counterweight to other forces in the region. Nor have they bought (yet) into the delusion that Iran's revolutionary impulse can be assumed to be benign. The US is thus still able to think of Iran as an enemy, which it is.
If so, the domestic tension and turmoil over the unfulfilled promise of economic relief, and over Khamenei’s demand for more and more sacrifices by the people (a "resistance economy," as he calls it) can provide fertile ground for destabilization of the Iranian regime. Such an opportunity was lost in 2009. It need not be lost again.
Posted by Steve Lieblich at 6:18 pm