Israeli victory is the only way to advance peace process 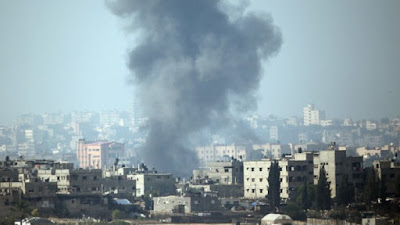 At his first security briefing, Avigdor Liberman, Israel’s Defense Minister, declared that Israel no longer has “the luxury of conducting drawn-out wars of attrition.” 100 days into his term, with no sign of the decades-long conflict slowing, it is clear that the time has come to apply that principle to the Israeli-Palestinian peace process. In order for there to be peace between Israel and its Arab neighbors, Israel must win and the Palestinians must lose.
For most of human history, military victory ended wars. The Pax Romana, a period of 200 years of relative peace within the Roman Empire, began only when Augustus defeated Marc Antony in the Battle of Actium.  When the North ravaged the South in the American Civil War, it caused the seemingly intractable conflict that claimed three quarters of a million lives over four years to fade away. The South, knowing it was defeated, never made trouble again. German and Japanese ill-will toward Western democracies in World War II rapidly dissipated, thanks to the bitter pill of defeat; friendship soon followed.
Today’s conventional wisdom holds that conflicts are best resolved through negotiation and compromise. But let’s look at the facts. After 40 years of negotiations to reunite Cyprus, the island remains divided, and 60 years of standoff over the Korean peninsula have achieved little. In Syria, the killing continues unabated despite five years of talks to reconcile Sunnis and Alawites. And at the same time, years of diplomatic efforts to roll back Iran’s nuclear program ended with the West’s capitulation to Tehran’s demands.
The negotiations fallacy is especially evident in the Arab-Israeli conflict.
The crux of the conflict is simple:  Israel wants to survive; the Palestinian leadership wants to destroy it.
Some Palestinian leaders make no secret of this. Hamas leaders’ open incitement to violence spawned the so-called “stabbing intifada,” and Palestinian Authority President Mahmoud Abbas praises the Palestinian “martyrs” and names streets after them. Others talk peace but demand a Palestinian “right of return” to Israel, a requirement that would effectively eviscerate the Jewish state by allowing millions of Arabs of Palestinian descent to resettle permanently within Israel’s borders.  But no matter their angle, all Palestinian leaders preach hatred towards Israel.
American policy has long been to prevent Israel from achieving a decisive military victory over its adversaries. In 1956, President Eisenhower forced Israel to abandon its territorial gains from the Suez Crisis.  Similarly, following the 1967 Six Day War, the U.S. helped engineer a U.N. resolution calling on Israel to return unspecified “territories occupied” in the war.  The Reagan administration stopped Israel from obliterating Yasser Arafat’s PLO forces in Lebanon in 1982, and, most recently, the Obama administration pressured Israel to limit its objectives in its 2014 war with Hamas. These concessions, which are often unilateral and irreversible, include settlement freezes, prisoner releases and forfeiture of territory.
Such policies deliver pernicious results; American “restraint” of Israel encourages its enemies to take risks. Much like government bailouts encourage banks to make high-risk, high-payoff investments by removing the consequences of failure, Israel’s adversaries need not fret over irrevocable loss because they know the international community will admonish Israel for any gains it achieves.
Moreover, restraining Israel legitimizes and nourishes Palestinian rejectionism, defined as the refusal to acknowledge Israeli sovereignty and right of Jews to live in their ancestral homeland. Because it knows there will be no consequences for its sophisticated propaganda war, the Palestinian Authority can continue to demonize Israel. “To become a normal people, one whose parents do not encourage their children to become suicide terrorists, Palestinian Arabs need to undergo the crucible of defeat,” writes Middle East Forum President Daniel Pipes.
When Israel has licensure, without American opprobrium, to unleash its military might after a Palestinian rocket or terror attack, as when Liberman ordered over 50 airstrikes on Hamas military infrastructure in Gaza in response to one rocket, the Palestinians retreat. The fear of crushing defeat is a potent weapon in neutralizing Palestinian resistance.
America’s handling of the Arab-Israeli conflict is preventing the kind of metamorphosis in Palestinian thinking about Israel that peace requires. It’s time for Washington to allow Israel to demolish the Palestinian dream of a one-state solution, free of Jews. As Ronald Reagan said regarding the US fight against communism, the only way to “win is if they lose.”
This doesn’t mean the U.S. should support a winner-take-all settlement of the Israeli-Palestinian conflict. But we must dispense with the fallacy that Israel is only a concession or two away from an American-brokered diplomatic breakthrough. As Gen. Douglas MacArthur said famously, “there is no substitute for victory.”
*Gregg Roman is the director of the Middle East Forum.
Posted by Steve Lieblich at 12:20 pm