About a year ago, Palestinian Authority Chairman Mahmoud Abbas stopped his threats to resign, dismantle the PA, and hand the keys to Israel.

He realized that the Israeli leadership is not impressed by his threats; that the Palestinian public does not hold him in high regard after more than 10 years of rule without any achievements; that his popularity has declined; and that no one in the territories pays heed to his empty admonitions. 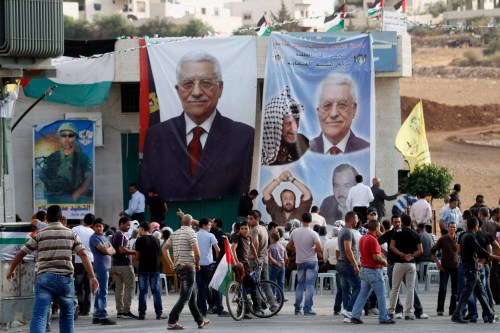 Mahmoud Abbas posters during the 2012 local elections. Featured alongside of him are photos of Yasir Arafat, Marwan Barghouti, and Abu Jihad.
(AFP Photo / Musa al-Shaer)


Now, suddenly, he has changed his tune. Instead of threatening to dissolve it, he now touts the PA as an important “national accomplishment” that must be preserved at all costs without allowing Israel to destroy it.


What Is Abbas Seeking?

Near the end of his tenure, the main consideration guiding 81-year-old Abbas is to remain in power while seeking an appropriate successor, one who will allow him to retire honorably and will ensure the well-being of his family and his two sons’ economic interests.

Abbas is not looking for diplomatic adventures. He is sticking with his strategy of internationalizing the conflict and, hence, he supports the French initiative. That initiative could lead to an international conference by the end of the year while entailing a minimum of risk to Abbas’ rule.

Israeli Defense Minister Avigdor Liberman’s new plan, which has been dubbed “the carrot and stick,” gravely concerns Abbas. Particularly worrisome to him is the idea of [Israel] opening a dialogue with Palestinian academics and business people. Abbas sees this as going over his head to find a new Palestinian address, thereby undermining his legitimacy as leader of the Palestinian people.

Hence, the PA has hastily put pressure on the Private Sector Coordination Council, which has issued a statement that “the PLO is the sole and exclusive representative of the Palestinian people.”

As Abbas sees it, Liberman’s new plan poses a threat to his continued rule. It is not every day that an Israeli defense minister, with the prime minister’s approval, announces a plan that determines, in effect, that Abbas is not the exclusive representative of the Palestinian people and that he, too, can be replaced.

The PA chairman is proceeding with great caution. Although it has been several days since Liberman broached his new plan, Abbas still has not responded to it personally and is keeping mum.

The defense minister’s new plan has upped the pressure on Abbas. According to senior Fatah officials, from now on he will take great care not to give the Israeli defense establishment pretexts to take measures to undermine senior PA senior officials as well as Abbas himself, such as invalidating their official VIP travel documents, lifting the easier conditions at the border crossings, and so on.
The PA chairman will now bear down more than ever on security coordination with Israel to prevent, through his security mechanisms, any resurgence of the “knife intifada,” which is abating.

The defense minister’s new plan has, indeed, become a means to pressure the PA chairman.
The carrot-and-stick policy in the territories is not new; it was begun after 1967 by then-Defense Minister Moshe Dayan. From that time to the present, several Israeli defense ministers have employed it. This policy has an internal logic of not punishing those not involved in incitement and terror while encouraging the moderates.

Liberman’s announcement of his new plan at this present juncture – concurrent with the local elections campaign in the territories and with the arrest by the Shabak (Israel Security Agency) of Hussein Abu Kweik, Hamas’ representative on the Committee to Coordinate the West Bank Elections – creates the impression that Israel is planning to intervene in these elections as part of the plan. This has led senior PA officials to claim that Israel wants to reestablish the Village Leagues – which, in their day of the late 1970s, dealt with municipal matters and routine services – and to treat the West Bank Palestinians as “residents” and not as a people with rights. 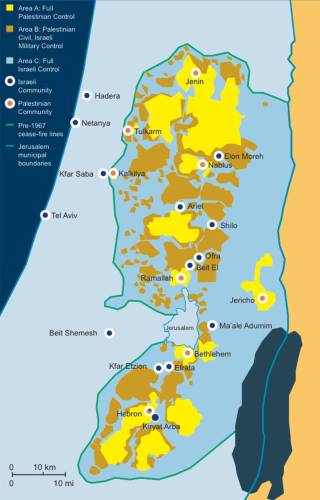 Abbas fears that the Israeli defense establishment will exploit the sharp dissension in Fatah to expand its ties with the heads of the independent lists and with heads of large West Bank clans who will run in the elections, thereby helping these figures create a route that bypasses the PA.

Israel is in full control of Area C of the West Bank, which constitutes about 60 percent of the total land. This enables Israel to exert major influence in all areas of life. The municipalities and local councils require Israel’s approval for their measures, which, in itself, gives Israel powerful leverage over the Palestinian population in general and the heads of the municipalities in particular.


Will Elections Erode the PA’s Status?

From Abbas’ perspective, the intensification of Israeli influence over the West Bank municipalities and local councils stands to help Israel erode the PA’s status and legitimacy among the West Bank Palestinian population, and thus undermine what he calls a major “national accomplishment.”
Israel, meanwhile, is allowing the preparations for the elections to go forward despite the fact that, according to the Oslo agreements, Israel could put a stop to them because of the participation of Hamas, which is defined as a terror organization.

That Israel refrains from aborting the elections is seen by the PA as a move aimed at weakening it and even further aggravating the strife between Fatah and Hamas.

Israel has not rescinded its recognition of the PLO, which is mandated by the Oslo agreements. It continues to work with the PLO in accordance with signed agreements, including the economic agreement known as the Paris Protocol. Nevertheless, the defense minister’s new plan is a sword of Damocles over Abbas’ head and over whoever will eventually replace him. In other words, notwithstanding the agreements between the two sides, Israel will not sacrifice its security interests, and any Palestinian leader can be replaced.
Posted by Steve Lieblich at 7:36 am