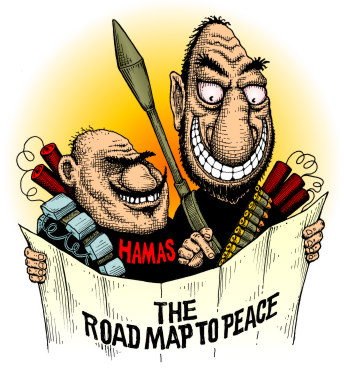 ...by attacking Israelis and Jews all over the world and sometimes American and Western interests, the Palestinians, not the jihadists, have been the pioneers of the global terrorism that now threatens the international community and many of the UN members.


The Palestinians succeeded in executing their nefarious plans with the active support of the Syrian, Iraqi and Libyan regimes and the fear of their victims in the West or elsewhere of reacting forcefully.
A short non-comprehensive list:
Most of the perpetrators of these attacks, including youngsters 14-15 years old (like the Palestinians of today) sent from Lebanon or Jordan, were quickly released by most of the countries involved, even when their own citizens were the victims. No Arab sponsor that gave refuge to all these terrorists has ever been bothered.
The Palestinian organizations have set the example for terrorists from the Lebanese Hezbollah, German radical leftists or and Tamil Tigers. Before al-Qaeda set up its training camps in Afghanistan, Palestinians were training, in Lebanon, a long list of terrorist organizations, including the Japanese Red Army, the Armenian ASALA, the Argentinian Montoneros, and the Basque ETA.
Some Palestinian terrorist groups preferred to be mercenaries in the service of Iraqi, Syrian or Libyan intelligence agencies targeting Western interests or other Arab countries. These include Fatah Revolutionary Council/Abu Nidal (ANO), Arab Nationalist Youth for the Liberation of Palestine (ANYLP), The Arab Liberation Front (ALF), Al Saiqa.
Imad Mughniyeh, Hezbollah’s international operations head and Chief of Staff of its military forces, was America’s most wanted international terrorist, key planner of the bombing of a US marine barracks and French paratroopers in Beirut in 1983, which killed more than 330 people. Mughniyeh began his career in the Palestinian Fatah movement at an early age, remained its member until 1984 and finished it when his car was bombed in Damascus in 2008.
One of the pillars of Al-Qaeda, its ideologue and strategist of jihad was Palestinian Islamic scholar Abdullah Azzam. He created the Mujahideen Services Bureau in Afghanistan, the foundation of international recruits for Al-Qaeda, many of whom held high positions in Al-Qaeda’s command structure. His teachings about jihad had a huge impact on generations of fighters including on Osama bin Laden himself and his ideas inspire foreign fighters to this day.
Azzam argued for taking the jihad back to Palestine, and was instrumental in the formation of Hamas by supporting it politically, financially and logistically and providing military training in Pakistan. The first generation of the military wing of Hamas’ Izz al-Din Qassam Brigades was trained by him. Hamas leaders even sent him a draft copy of its charter in 1987 for “review”.
Hamas is the Islamist organization which derailed the peace process between Israel and the Palestinians by staging, together with the Palestinian Islamic Jihad (PIJ), the campaigns of suicide terrorism immediately after the signing of the Oslo agreement, all along the 1990s and then during the second bloody intifada, which alienated the Israeli public opinion from the peace process and strengthen those circles in Israeli society who supported the building of settlements.
The 2005 Israeli unilateral withdrawal from Gaza, leaving behind a rich educational and agricultural infrastructure, did not bring peace and development for the local population but rather immediate campaigns of rocket attacks against Israeli territory, the militarization of Gaza under the Hamas elected government and finally the military coup against the legitimate Palestinian Authority and its actual split into two enemy entities.
Ban Ki-moon ...asks Israeli authorities “to unequivocally support the Palestinian Authority and Palestinian institutions” and make “significant shifts in policies toward the West Bank and Gaza.”
True, he also tells the Palestinians that change will require of them “consistently and firmly denouncing terrorism and taking preventive action to end attacks on Israelis, including an immediate stop to Gaza tunnel construction.” But there is no real denunciation by him of the intense incitement by the PA authorities at the highest level and the Hamas government in support of the violence in the West Bank.
Interestingly, Hamas — its nefarious terrorism and violence and its dedication to Israel’s destruction — is not mentioned by name even once in the Secretary-General’s statements.
It is time the UN and the international community recognize the Palestinians’ key role in their present predicament...
Posted by Steve Lieblich at 1:11 pm