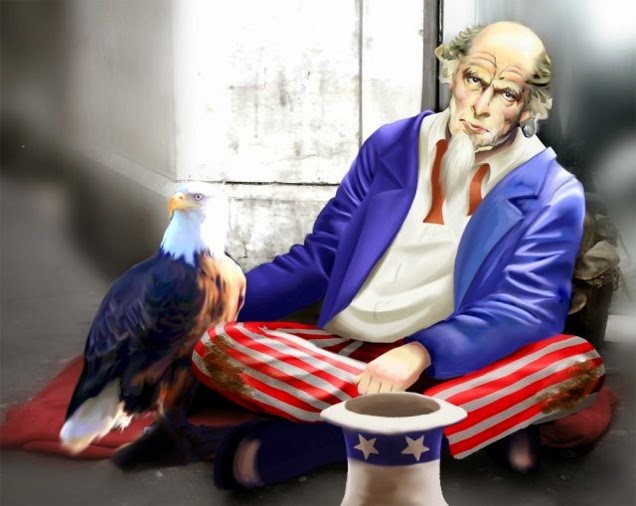 Uncle Sam appears to have lost the courage of his convictions....

From The Washington Post, 17 April 2015, by Natan Sharansky, human rights activist, former political prisoner in the Soviet Union, and chairman of the Jewish Agency for Israel:

...If Iran wishes to be treated as a normal state, ...then it should start acting like one.

...The Obama administration apparently believes that only after a nuclear agreement is signed can the free world expect Iran to stop its attempts at regional domination, improve its human rights record and, in general, behave like the civilized state it hopes the world will recognize it to be.

As a former Soviet dissident, I cannot help but compare this approach to that of the United States during its decades-long negotiations with the Soviet Union, which at the time was a global superpower and a existential threat to the free world. The differences are striking and revealing.

For starters, consider that the Soviet regime felt obliged to make its first ideological concession simply to enter into negotiations with the United States about economic cooperation. At the end of the 1950s, Moscow abandoned its doctrine of fomenting a worldwide communist revolution and adopted in its place a credo of peaceful coexistence between communism and capitalism. The Soviet leadership paid a high price for this concession, both internally — in the form of millions of citizens, like me, who had been obliged to study Marxism and Leninism as the truth and now found their partial abandonment confusing — and internationally, in their relations with the Chinese and other dogmatic communists who viewed the change as a betrayal. Nevertheless, the Soviet government understood that it had no other way to get what it needed from the United States.

Imagine what would have happened if instead, after completing a round of negotiations over disarmament, the Soviet Union had declared that its right to expand communism across the continent was not up for discussion. This would have spelled the end of the talks.

Yet today, Iran feels no need to tone down its rhetoric calling for the death of America and wiping Israel off the map.

Of course, changes in rhetoric did not change the Soviet Union’s policy, which included sending missiles to Cuba, tanks to Prague and armies to Afghanistan. But each time, such aggression caused a serious crisis in relations between Moscow and Washington, influencing the atmosphere and results of negotiations between them. So, for example, when the Soviets invaded Afghanistan shortly after the SALT II agreement had been signed, the United States quickly abandoned the deal and accompanying discussions.

Today, by contrast, apparently no amount of belligerence on Iran’s part can convince the free world that Tehran has disqualified itself from the negotiations or the benefits being offered therein. Over the past month alone, as nuclear discussions continued apace, we watched Iran’s proxy terror group, Hezbollah, transform into a full-blown army on Israel’s northern border, and we saw Tehran continue to impose its rule on other countries, adding Yemen to the list of those under its control.

Then there is the question of human rights. When American negotiations with the Soviets reached the issue of trade, and in particular the lifting of sanctions and the conferring of most-favored-nation status on the Soviet Union, the Senate, led by Democrat Henry Jackson, insisted on linking economic normalization to Moscow’s allowing freedom of emigration. By the next year, when the Helsinki agreement was signed, the White House had joined Congress in making the Soviets’ treatment of dissidents a central issue in nearly every negotiation.

Iran’s dismal human rights record, by contrast, has gone entirely unmentioned in the recent negotiations. Sadly, America’s reticence is familiar: In 2009, in response to the democratic uprisings that mobilized so many Iranian citizens, President Obama declared that engaging the theocratic regime would take priority over changing it.

Reality is complicated, and the use of historical analogies is always somewhat limited. But even this superficial comparison shows that what the United States saw fit to demand back then from the most powerful and dangerous competitor it had ever known is now considered beyond the pale in its dealings with Iran.

Why the dramatic shift? One could suggest a simple answer: Today there is something the United States wants badly from Iran, leaving Washington and its allies with little bargaining power to demand additional concessions. Yet in fact Iran has at least as many reasons to hope for a deal. For Tehran, the lifting of sanctions could spell the difference between bankruptcy and becoming a regional economic superpower, and in slowing down its arms race it could avoid a military attack.

I  am afraid that the real reason for the U.S. stance is not its assessment, however incorrect, of the two sides’ respective interests but rather a tragic loss of moral self-confidence. While negotiating with the Soviet Union, U.S. administrations of all stripes felt certain of the moral superiority of their political system over the Soviet one. They felt they were speaking in the name of their people and the free world as a whole, while the leaders of the Soviet regime could speak for no one but themselves and the declining number of true believers still loyal to their ideology.

But in today’s postmodern world, when asserting the superiority of liberal democracy over other regimes seems like the quaint relic of a colonialist past, even the United States appears to have lost the courage of its convictions.

We have yet to see the full consequences of this moral diffidence, but one thing is clear: The loss of America’s self-assured global leadership threatens not only the United States and Israel but also the people of Iran and a growing number of others living under Tehran’s increasingly emboldened rule. Although the hour is growing late, there is still time to change course — before the effects grow more catastrophic still.

Posted by Steve Lieblich at 7:13 am