From the Washington Post, 31 March 2015, by Matthew Lee and George Jahn:

LAUSANNE, Switzerland — Nuclear talks between Iran and six world powers have entered into overtime, after negotiators decided to ignore a midnight Tuesday deadline and give more time to efforts to reach agreement.


Negotiations were continuing into Wednesday morning, local time. U.S. State Department spokeswoman Marie Harf says the extension was justified although “several difficult issues” still needed to be bridged.
The sides hope to reach a preliminary understanding that will allow them to enter a new phase of negotiations aiming at a final deal by June....
From Reuters, 31 March 2015,  BY PARISA HAFEZI: 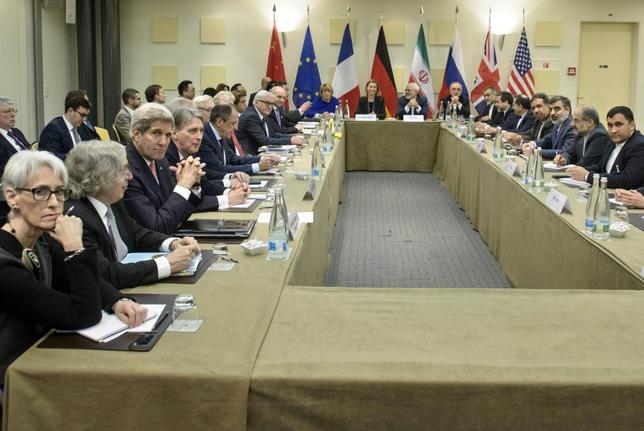 Iran seeks nuclear deal but not normal ties with 'Great Satan'
Iran is not expected to normalize relations with the United States even if Tehran reaches agreement with world powers on its nuclear program, officials and analysts said.
...Loyalists of supreme leader Ayatollah Ali Khamenei, drawn from among Islamists and Revolutionary Guards who fear continued economic hardship might cause the collapse of the establishment, have agreed to back President Hassan Rouhani’s pragmatic readiness to negotiate a nuclear deal, Iranian officials said.

"But it will not go beyond that and he (Khamenei) will not agree with normalizing ties with America," said an official, who spoke in condition of anonymity.
"You cannot erase decades of hostility with a deal. We should wait and see, and Americans need to gain Iran’s trust. Ties with America is still a taboo in Iran.”

...Khamenei has continued to give speeches larded with denunciations of Iran's "enemies" and "the Great Satan", words aimed at reassuring hardliners for whom anti-American sentiment has always been central to Iran's Islamic revolution.
Khamenei, whose hostility towards the Washington holds together Iran’s faction-ridden leadership, remains deeply suspicious of U.S. intentions.
But despite disagreement over Iran-U.S. ties, Iranian leaders, whether hardliners or pragmatists, agree that a nuclear deal will help Iran to rebuild its economy.
Relations with Washington were severed after Iran’s 1979 Islamic revolution and enmity to the United States has always been a rallying point for hardliners in Iran.

“As long as Khamenei remains Supreme Leader the chances of normalizing U.S.-Iran relations are very low. Rapprochement with the U.S. arguably poses a greater existential threat to Khamenei than continued conflict,” said Karim Sadjadpour, an Iran expert at the Carnegie Endowment for International Peace in Washington.

“After three decades of propagating a culture of defiance against the U.S., it will be curious to see whether and how Khamenei spins a nuclear compromise as an act of resistance, not compromise.”

...“Despite all the meetings over the nuclear issue, Iran and America both need an enemy and I do not think ties will be normalized after the deal. But they will keep the communication channel open,” said Tehran-based political analyst Saeed Leylaz.
“Iranian leadership needs chants of Death to America to keep hardliners united. And opening an American embassy in Tehran is not going to happen, at least in the near future.”

...Iran’s rival Saudi Arabia fears a nuclear deal might embolden Tehran to tighten its grip in the Middle East and step up its efforts to dominate Arab countries such as Lebanon, Syria and Iraq.
And like Washington's other Middle Eastern ally, Israel, Saudi Arabia fears that President Barack Obama has in the process allowed their mutual enemy to gain the upper hand.
Posted by Steve Lieblich at 6:17 am