...Needless to say, this is a dangerous time for Jews around the world. Radical Islam has made it clear that its agenda is to kill as many Jews as possible, and to eliminate Israel. Yet, there are those hopefuls who maintain that it is the fault of the Jews for all that ails Islam. They believe that if Jews would only act correctly, whatever that means, there would be no war, no poverty, and no joblessness and hopelessness among the Muslims – and all would be serene.

What is scary is that some of these hopefuls are Jews themselves, and are connected to an organization called the New Israel Fund – a cleverly devised name to fool the naïve and well-intended into donating money towards Israel’s detriment. 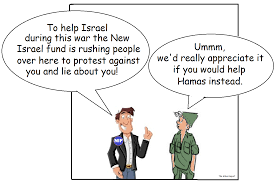 The New Israel Fund, or NIF, is a chief funder of many of the actions and organizations that seek to see Israel criminalized in world courts, to promote the downfall of Israel’s economy, and to usher in a state of Palestine absent any considerable Jewish presence.

So how do they do it, and what keeps them going?

New Israel Fund is a fund aggregator that draws money under the guise of being pro-Israel, and metes it out to sub-organizations that have very real anti-Israel agendas. They make no attempts to hide it either.

B’tselem, for example, is a major grantee of the NIF – and it vigorously works to shame the IDF and its soldiers in the world media.

Breaking the Silence (Shovrim Shtika) is now engaging in an “investigation” into Israel’s actions in Gaza, with the hope of seeing the ICC file formal charges against Israeli leaders.

Then there is Adalah, which sends missionaries around the globe, instructing them on local and international methods of charging various Israeli government entities with any number of crimes and violations – so that Israel gets tied up in minor legal battles around the world, thus distracting personnel and freezing up money.

NIF also claims to be against attempts to boycott Israel, but among its very active grantees are groups such as the Human Rights Defenders Fund (HRDF,) which spends a good deal of its resources pushing Boycott, Divest, and Sanction (BDS) initiatives on American college campuses and in corporate circles.

The brutal and bloody hacking to death of Jews in an Israeli synagogue did not stir too many people outside of Israel, but the brutal killing of an entire newspaper staff in Paris did. Those Jews who died in the Paris kosher supermarket were mourned by the world because their deaths were tied to the deaths of the Charlie Hebdo staff, and then people cared.

The New Israel Fund is funded by American Jewish foundations, including The Jacob and Hilda Blaustein Foundation. Given their other support patterns, they likely do not know how the NIF works to undermine Israel.

Sally Gottesman is another example. She gives to the NIF’s initiatives for women, but would probably give directly to her causes if she were aware of the NIF’s duplicitous nature. The same can be said of Dr. Gabor T. Herman.

Yet there are other donors, such as the Juliane M. Heyman 2008 Charitable Remainder Unitrust. Its donations to other organizations are relatively small, making its donation to the NIF uncharacteristically large. The managers of this fund might be in full support of anti-Israel messaging, knowing full-well just where the money is going.

The New Israel Fund and its many grantees hurt Israel. There is no two ways about it, and given the times we are living in, Israel and Jews have enough on our plates without having to worry about deep cuts from within.
Posted by Steve Lieblich at 4:07 pm