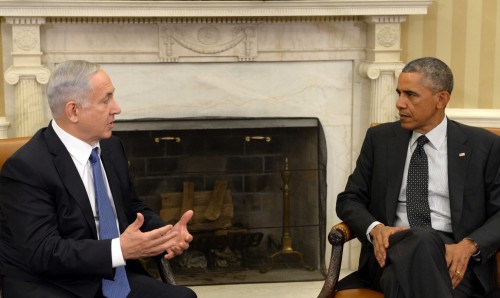 EXECUTIVE SUMMARY:
If a “permanent agreement” with Iran fails to guarantee the bare minimum safeguards against Iran’s nuclearization that Israel feels is necessary, Israel will have to rethink its policy and avoid being influenced by the fact that its closest ally signed an unacceptable agreement with Iran. Israel will have to defend itself by itself, as U.S. President Barack Obama once said – with everything that doing so entails. This would truly put the relationship between Israel and the U.S. to the test.

In recent days, following the impolite and inappropriate personal attack against Prime Minister Benjamin Netanyahu in the American press, from the mouths of high-ranking officials in Washington, relations between Israel and the U.S. have deteriorated to an all-time low. It is time to put things back in proportion, in light of the severity of the American remarks.

The relationship with the U.S., Israel’s biggest and most important ally, is unique. This relationship has had its highs and lows. For example, the U.S. did nothing to delay the extermination of Jews during World War II, but supported the establishment of the State of Israel and was the first to recognize it. The U.S. opted not to aid Israel during the 1948 War of Independence and banned the sale of arms to the fledgling country, but since the 1960s it has been supplying Israel with weapons almost exclusively.

Every year, the Americans give Israel a gift of approximately $3.5 billion dollars for its defense needs (three-quarters of which are to be used only for purchases from the U.S.) and Israel uses this gift to fund the Israel Defense Forces’ everyday needs and to ensure that the army grows stronger and stronger. But the American contribution to Israel’s security is not just monetary. The U.S. partners with Israel in the development of anti-missile technology; there is robust intelligence cooperation between the two countries, in which each country contributes greatly to the other; and the exchange of ideas on professional issues between the commanders of the Israeli and the American armies is inspiring and extremely important to both sides.

The U.S. is obviously committed to ensuring that Israel maintains a significant military advantage over its neighbors, and they are trying very hard to fulfill that commitment.
But Israel does not have to accept every U.S. demand.

The U.S.’s friendship is important to Israel in the diplomatic realm as well. Without U.S. support in the international arena, and especially in the U.N. Security Council, Israel would be in a very difficult position today, to the point of diplomatic and economic isolation. The American support stands out in practical matters, like in the recognition of the red shield of David as an internationally recognized medical symbol, but also in other matters, such as the revocation of the U.N. resolution equating Zionism with racism, or staving off the world’s criticism of Israel’s nuclear program.

The U.S. understands the significance of Israel being the only democratic nation in the region – a stable nation that the U.S. can rely on in a time of crisis but also a nation it can cooperate with on a day-to-day basis in the fields of intelligence and counter-terrorism (in a way that has so far contributed greatly to the U.S.). Both countries share similar values and the people of both countries harbor warm feelings toward the other.

So is it true that because of this important support, to the point of dependency in certain areas, that Israel needs to accept every American demand? Not at all. But blatantly ignoring U.S. demands, or insulting American figures with undiplomatic language, or making remarks about the U.S.’s policies and conduct, is entirely unhelpful. In fact, it is detrimental to the relations between the two allies.

More polite dialogue and less insulting remarks would ultimately serve Israel’s interests best. The arrogant behavior and declarations on Israel’s part point to a lack of understanding of the American psyche, and come across as disrespectful to the U.S. and its leaders. At the same time, the remarks made by senior Washington spokespeople against Netanyahu also point to a deep lack of understanding of the Israeli frame of mind.

These are two proud nations, and mutual insults are not helping either one. In that respect, the most recent press briefing in Washington crossed every line.

So can Israel rely on the U.S.?

In the near future, following the U.S.-led talks, both countries will have to grapple with the implications of the agreement between Iran and world powers. The Americans have brought the Iranians to the negotiating table, after imposing unprecedented sanctions and recruiting the Europeans to follow suit. The Europeans, to some extent, feared Israel’s response should they refuse to take strong action against Iran. However, at the negotiating table, the U.S. has created the impression that the ultimate agreement is more important to them than it is to the Iranians, and that they would do anything to avoid resorting to the military option (which has been aggressively promoted by order of the current president). Furthermore, the Iranians have now caught on to the weakness of the American position, and in the wake of the U.S.’s efforts to combat the Islamic State group, the Iranians feel even stronger. The very thing we were afraid of, and that Israel warned the Americans against, is now happening: The U.S.’s attention has been diverted elsewhere and the Iranians are taking advantage of that to the fullest.

The longer the U.S. remains in Iraq and Syria, the more it becomes amenable to easing the terms it is willing to offer Iran and the more likely it becomes that an agreement with Iran will be reached. If that happens, it will have to be studied very carefully. Such an agreement needs to be judged against the criterion set by U.S. Secretary of State John Kerry himself, when he said that a bad deal would be worse than no deal.

A bad deal would truly put the relationship between Israel and the U.S. to the test. During the course of the negotiations, even when Israel deemed the interim agreement unacceptable, Israel made sure not to interfere in the process. But if the permanent agreement fails to guarantee the bare minimum that Israel feels is necessary, it will have to rethink its policy. Israel will have to act in its best interest and avoid being influenced by the fact that its closest ally signed an agreement with Iran. If it turns out unequivocally that Israel cannot rely on anyone on this matter of enormous importance to its security and even its existence, then it will have to defend itself by itself, like U.S. President Barack Obama once said – with everything that doing so entails.

There are endless questions that would arise should the U.S. pose Israel with a dangerous fait accompli on Iran – the issue Israel defines as the most sensitive on the agenda. At that point, the elimination of the Iranian threat will become the top priority, overriding any other consideration.

*Maj. Gen. (res.) Yaacov Amidror is the Greg and Anne Rosshandler Senior Fellow at the Begin-Sadat Center for Strategic Studies, and former national security advisor to the Prime Minister.
Posted by Steve Lieblich at 7:17 am