When it comes to Israel, the Arab world has moved on. But Obama doesn't get it.

... the inaugural Abu Dhabi Strategic Debate, which took place October 19-20, 2014 ... was sponsored by the Emirates Policy Council with the support of the UAE Foreign Ministry...

The Debate began the morning of October 19 with a speech by Dr. Anwar Gargash, the UAE’s Minister of Foreign Affairs.  Dr. Gargash set the tone for the conference, in my view, when he stated,


“Over the past few years, the UAE has repeatedly warned about the growing threat that extremist actors and ideologies pose to our region.  While some of our allies thought that we were being too alarmist, the rise of Daesh [ISIS] confirms the magnitude of the threat.  Instead of becoming moderated through engagement, so-called ‘moderate Islamists’ are increasingly being drafted into the ranks of radical groups.  This demonstrates the fallacy of trying to distinguish between ‘moderate’ and ‘radical’ forms of ideological extremism.  Make no mistake:  many of these movements that are described as ‘moderate’ in some lexicons, provide the environment for greater radicalization and the emergence of groups such as Al Qaeda and Daesh.  Therefore, countering the threat posed by these groups requires a clear-sighted and comprehensive strategy.”

The bulk of the conference consisted of nine debate panels in which different themes were discussed. ... the first three debate panels were devoted to a discussion of the policies toward the Gulf of the

While the choice of subjects to discuss in the nine debate panels was a good indicator of what is currently of concern to the UAE, the choice of subjects not to discuss was also revealing.
Most noteworthy, there was no panel on the Israeli/Palestinian conflict.  Indeed, this was barely mentioned by any of the speakers...  [suggesting] that the rise of ISIS, the threat from Iran, the situation in Egypt, and the conflicts in Syria, Iraq, Yemen, and Libya are all far more important to the UAE....

The inaugural session of the Abu Dhabi Strategic Debate took place last week, with scholars coming from around the world to participate in two days of discussion on a plethora of topics. Hisham Melhem, the Washington bureau chief for Al Arabiya News, subsequently published a lengthy summary of the proceedings on Al Arabiya’s website, and reading it, I was struck by the absence of certain topics one might expect to feature prominently. Egypt, Iran, oil, ISIS, Turkey, Russia, the U.S., and Islamic extremism were all there. But in 1,700 words, the Palestinians weren’t mentioned once...

... it was fascinating to attend a two day conference about the Middle East in times of upheaval in which Israel was mostly ignored, with the only frontal criticism of her policies delivered by an American diplomat.

And this explains a lot about the current U.S.-Israel spat. President Barack Obama entered office with the firm belief that the best way to improve America’s relations with the Muslim world was to create “daylight” between the U.S. and Israel, and for six years now, he and his staff have worked diligently to do exactly that. Nor was this an inherently unreasonable idea: Even a decade ago, Arab capitals might have cheered the sight of U.S. officials hurling childish insults at their Israeli counterparts.

The problem is that the Arab world has changed greatly in recent years, while the Obama administration–like most of Europe–remains stuck in its old paradigm.

Granted, Arabs still don’t like Israel, but they have discovered that Israel and the Palestinians are very far down on their list of urgent concerns.

The collapse of entire states that were formerly lynchpins of the Arab world, like Syria, Iraq, and Libya; the fear that other vital states like Egypt and Jordan could follow suit; the rise of Islamic extremist movements that threaten all the existing Arab states; the destabilizing flood of millions of refugees; the fear of U.S. disengagement from the region; the “predicament of living in the shadows of what they see as a belligerent Iran and an assertive Turkey” (to quote Melhem)–all these are far more pressing concerns.

And not only has Israel fallen off the list of pressing problems, but it has come to be viewed as capable of contributing, however modestly, to dealing with some of the new pressing problems.

Last month, Robert Satloff of the Washington Institute published his impressions from a tour of the Mideast, including of Israel’s deepening strategic relationships with Egypt and Jordan. “Indeed, one of the most unusual moments of my trip was to hear certain Arab security officials effectively compete with one another for who has the better relationship with Israel,” he wrote. “In this regard, times have certainly changed.”

In fact, in this new Middle East, a U.S.-Israel spat probably generates more worry than glee in Arab capitals. Once, it was an Arab article of faith that America cared little about Arabs but greatly about Israel. Thus to the degree that Arab and Israeli concerns overlapped, as they do now on issues ranging from Iran to ISIS, America could be trusted to deal with the threat. 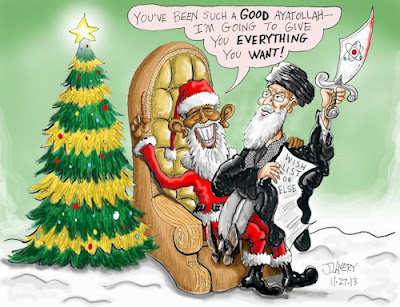 Now, the Obama administration still appears to care little for Arab concerns; it seems hell-bent on striking a grand bargain with Iran and withdrawing from the Mideast. But the Arab world’s former ace in the hole to prevent such developments–Israel’s influence in Washington–suddenly looks more like deuce.

Yet all these shifting winds seem to have blown right by the Obama administration: It still acts as if America’s position in the Muslim world depends on showing that it hates Israel, too. And thus you reach the farce of a two-day conference in Abu Dhabi where “the only frontal criticism” of Israel’s policies was “delivered by an American diplomat.”

When it comes to Israel, the Arab world has moved on. But the Obama administration remains stuck in the last century.
Posted by Steve Lieblich at 6:02 pm