Aid to the Palestinians: A Case of Flagrant Discrimination 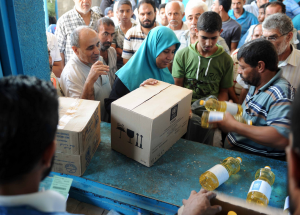 The disproportionate dispensation of international aid to the Palestinians is discriminatory and biased.


If officials in any developed country would dispense aid to their citizens the way the international community dispenses aid to the Palestinians, they would be placed behind bars for blatant discrimination if not racism. This would clearly be the verdict of any court that compared international aid to the 4.2 million Palestinians (World Bank estimate), to Ethiopia, a western ally, and other African states. 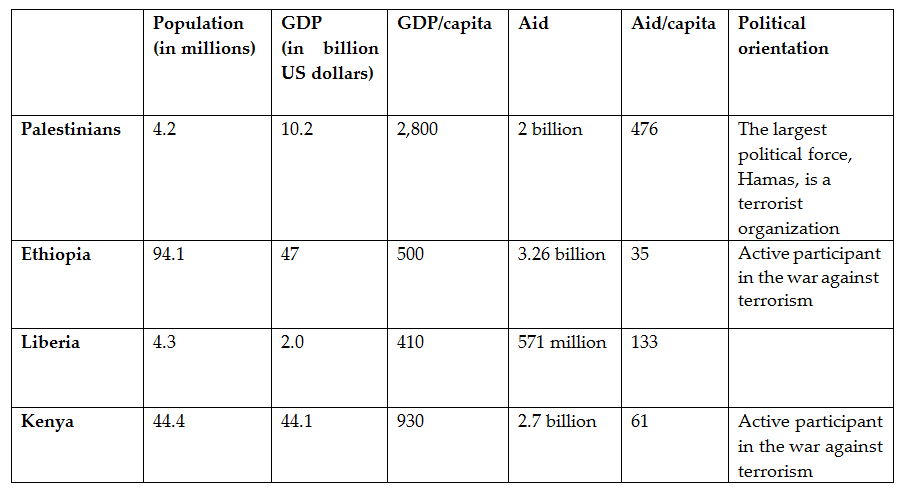 ...Ethiopia’s population is twenty times even the most generous estimate of the combined populations of the West Bank and Gaza: 94 million Ethiopians compared to 4.2 million Palestinians. This means that the average Palestinian receives fifteen times more aid per capita (US$476) than the average Ethiopian (US$35)! (See table)

But the discrimination does not end there.

The second golden rule in allocating resources in most developed countries is that you benefit proportionately the citizens who are poorer and suffer more hardship. Thus, not only do richer citizens proportionately pay higher taxes, they receive proportionately less allocations or services for the taxes they pay.

Just imagine if it were discovered that residents in the Upper East Side received fifteen times more services from the state and the City of New York, than, let’s say, the residents of Harlem.

Yet, the most disturbing aspect in this ongoing project of blatant discrimination is that Ethiopia is a state that actively participates in the war against terrorism. For example, it is the largest contributor of troops to the peace-keeping force in Somalia, where Ethiopian troops along with troops from other African states risk and lose their lives in the long war against Harakat al-Shabab, a murderous militia affiliated to al-Qaeda. The Palestinians, in contrast, produce terrorism. Hamas, the rulers of Gaza and arguably the largest political force amongst the Palestinians, has been engaged in indiscriminate acts of terror ranging from suicide bombings to missile launchings for over twenty years.

International aid to the Palestinians, albeit indirectly, abets Islamist terrorism. The billion dollars Abbas spends on Gaza, at least one-third of which is provided by international aid, finances the al-Aqsa Martyr’s Battalions in Gaza who belong to Fatah, a movement President Abbas heads, and which launches rockets indiscriminately at Israeli population centers. It also lets Hamas off the financial hook in governing the Gazan population in order to devote almost all of its resources to fighting the Islamist war against Israel and in paying the salaries of 25,000 teachers they hired after taking over Gaza in 2007. These teachers have since been indoctrinating school children with the jihadist ideology.

What explains this largess towards the Palestinians?

Much of it can be explained by the belief both amongst the Europeans and the US, the major providers of aid (many of the wealthy Gulf States are too busy financing terrorist organizations elsewhere), that economic aid buys peace and quiet. However, some of the discrimination might be due to perceptions that Africans are less worth the effort, perceptions that might be called ‘racist’.

President Obama has recently embarked on the difficult task of forging an alliance against the Islamic State. Much easier, but no less necessary, is to make sure that international aid, in which the US is a major contributor, avoids rewarding actors that undermine his efforts in the war against terrorism, like many of the Palestinians, instead of discriminating against states like Ethiopia and Kenya who are on the front lines in the battle against extremist Islamic movements.

*Prof. Hillel Frisch, a senior research associate at the Begin-Sadat Center for Strategic Studies, is a professor of political science and Middle East studies at Bar-Ilan University.
Posted by Steve Lieblich at 4:46 pm