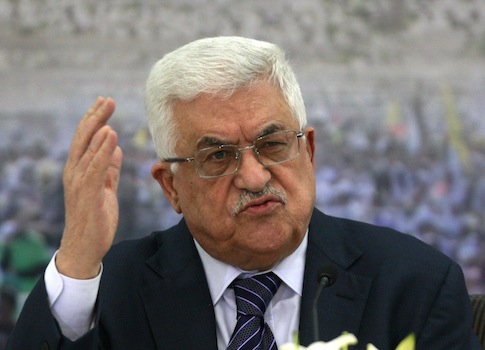 Palestinian Authority President Mahmoud Abbas has done what he always does. As usual, upon arriving at a crucial junction, he hesitates for a moment before making the wrong turn...

Addressing the U.N. General Assembly over the weekend, Abbas was expected to take a semi-appeasing tone, a peacemaker's tone, and he was expected to address the U.N. in English. Instead, he acted as if he were attending an election rally in Ramallah, speaking in Arabic and taking an aggressive tone, as if he were representing Hamas.

Abbas antagonized the entire Israeli political spectrum, accept for Meretz Chairwoman Zehava Gal-On, who expressed her understanding of the circumstances that drove Abbas to use an unusually abrasive tone.

The Palestinian [Arabs]' verbal belligerence is especially discordant in a time when the majority of the world, including many Arab nations, is banding together to fight the Islamic State group.

In his speech, Abbas has effectively debunked the U.S.-sponsored peace process. His speech was extreme enough to vex even Washington, and the entire diplomatic world had a front row seat to listen to [his] lies.

Operation Protective Edge was an Israeli attempt at "genocide"? If anything, Abbas was almost as disappointed by the caution Israel exercised during the military campaign as Habayit Hayehudi Chairman Naftali Bennett. Abbas further complained about Israel's arrest of Hamas operatives in Judea and Samaria over the murder of three Israeli teens -- but everyone knows how relieved he actually was, as some of those operatives were part of a Hamas plot to stage a coup in the West Bank.

...Abbas traditionally plays the role of a wolf in sheep's clothing. In 2000, he incited Yasser Arafat to bolt from Camp David the moment then-Prime Minister Ehud Barak expressed willingness to discuss the future of Jerusalem; and years later he bolted back to Ramallah the moment former Prime Minister Ehud Olmert presented him with an appeasing peace proposal, the likes of which Israel had never devised before.

There is no doubt that at this point, Abbas has abandoned the path of negotiations. He strives to impose some sort of solution on Israel, and he fails to understand that the tumultuous developments in the Arab world, including the conflict between Ramallah and the Gaza Strip, have plunged the Palestinian stock to a new low.

...Netanyahu is scheduled to address the U.N. General Assembly on Monday and respond to Abbas' speech....
Posted by Steve Lieblich at 7:05 am