Israel vs. the Iran-Hizballah Axis 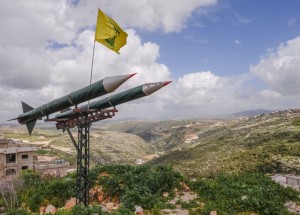 EXECUTIVE SUMMARY: The IDF and the Iran-Hizballah axis are each in the midst of a long-term military build-up, preparing for the possibility of a full-scale eruption of the ongoing covert struggle between them. With Iranian assistance, Hizballah has amassed an unprecedented rocket and missile arsenal that threatens all of Israel. The IDF has prepared for a combined air and large-scale ground operation, driven by new intelligence and precision-firepower capabilities, to deliver a knock-out blow and eliminate Hizballah as a fighting force for years to come.

A major regional military build-up is underway in both Israel and Lebanon, as the IDF and the Iran-Hizballah axis seek to be as prepared as possible for the next time that open hostilities break out between them.

In southern Lebanon and the Beka’a Valley in eastern Lebanon, Hizballah is pointing over 80,000 rockets and missiles at Israel. This represents a new level of threat to the Israeli home front, and the scale of Hizballah’s offensive projectile arsenal has been made possible by Iranian funding, arms shipments, and use of Syria as a transit route, among other weapons smuggling routes.
Although Hizballah is heavily involved in the Syrian civil war, its offensive projectile capabilities continue to grow, and the Shiite terrorist entity is now focused on importing accurate, long and medium-range guided missiles with which it hopes to paralyze critical Israeli civilian infrastructure (ports, Ben-Gurion International Airport, power plants) and military nerve centers in a future conflict. Hizballah would also like to have advanced surface-to-air batteries to challenge the Israel Air Force (IAF), and surface-to-sea systems to target the Israel Navy and Israel’s gas drilling sites in the Mediterranean Sea.
Iran’s extra-territorial Quds Force is responsible for getting arms to Hizballah in Lebanon, where they are mostly stashed inside civilian homes built with retractable roofs, allowing for launching rockets at Israel. With one out of every ten homes in Lebanon used as a rocket launcher or weapons storage depot, Hizballah and Iran have hidden the core of their firepower in the midst of the Lebanese civilian population, endangering its safety in a future war.
In Israel, a military response to this challenge is being prepared, designed to quickly deliver a devastating knock-out blow to Hizballah. The IDF plans to implement a combination of unprecedented air power capabilities, and a swift ground maneuver to eliminate Hizballah as a fighting force for years to come. This approach is predicated on new intelligence resources, and an air force strike power – which has not yet been used to full capacity – that enables fighter jets to destroy hundreds of targets a day with precision-guided bombs, representing a colossal level of firepower.
The IDF’s new capabilities also lean on a network-centered technological revolution that allows the three branches of the IDF – air force, ground forces, and navy – to coordinate their strikes, and stay linked in to Military Intelligence in real time. The new technology also allows both the General Staff and the commanding levels in the field – at the division, brigade, and battalion command levels – to enjoy enhanced command and control abilities.
A debate within senior echelons of the IDF has occurred in recent years on how best to extinguish Hizballah rocket fire, specifically over whether there is a need to send in ground forces if the IAF has developed such blinding firepower. It seems that military decision-makers have sided with those who believe that both elements are essential in a full-scale conflict, to ensure as speedy a victory as possible. As part of its continued emphasis on the ground forces, the IDF manufactures state-of-the-art Merkava 4 tanks and, until recently also produced Namer Armored Personnel Carriers (APC) for infantry brigades. The production lines for the Namer APC have recently come to a standstill due to the substantial cut to the national defense budget.
Additionally, war drills and training for ground units have, in recent years, centered on getting various components to cooperate as closely as possible when moving into enemy territory. The ground forces, stung badly by its poor performance during the 2006 Second Lebanon War, has been preparing for new conflict with Hizballah by drilling a blitz invasion of southern Lebanon and the destruction of Hizballah infrastructure, using a massive combination of tanks, infantry, artillery, and engineering corps.

Hizballah is highly deterred by Israel’s firepower, but is nevertheless exploiting its presence in Syria – and contribution to the Alawite-Iranian war effort to keep Bashar al-Assad in power – to try and import strategic arms to Lebanon for later use against Israel. According to international media reports, Iranian arms supplies arrive regularly in Syria, creating the basis for a smuggling route to Hizballah. The Assad regime owes its survival to Iran and Hizballah, and appears to be fully compliant with Iranian requests to facilitate the transfer of weapons to Hizballah.
Israel has publicly drawn clear red lines forbidding the transit of advanced arms into Lebanon, and, according to foreign media claims, occasionally enforces these lines through low-profile air strikes on missile shipments. The most recent reported example is the alleged Israeli air strike on a Syrian missile base near Latakia, where the alleged target was Russian-made SA-125 surface-to-air missiles. Hizballah seeks such systems in order to disrupt the IAF’s ability to operate over its centers of activity in Lebanon.
The Iranian-Hizballah armament program – which enjoys Syrian assistance – often places the IDF in a difficult situation, in which it must decide between intercepting the arms shipments and risking a conflict and allowing Hizballah to continue building up its arsenal. Meanwhile, Hizballah also continues to try and attack Israeli targets overseas, though the large majority of its efforts are thwarted. Though this struggle spans international borders, it currently remains largely covert and out of the public domain. In the turbulent Middle East, however, that could change at any time.

Click here for a PDF version of this article

Posted by Steve Lieblich at 5:53 am