What is Israel fighting for?

From Arutz Sheva, 18 Nov 2012, by Daniel Greenfield, New-York-City-based writer and freelance commentator, a Shillman Journalism Fellow at the David Horowitz Freedom Center and blogger at sultanknish.blogspot.com:

...The Arab Spring put Islamists into power in Egypt. Suddenly the Muslim Brotherhood was running things on both sides of the Rafah Crossing. Hamas switched its allegiance from the shaky Shiite axis of Iran, Syria and Iraq over to the rising Sunni Islamist axis of Saudi Arabia, Qatar, Turkey and Egypt. The Islamist terrorist group was no longer an isolated arm of Iranian foreign policy, it could count on the backing of Turkey, Qatar and Egypt.
Not long after Qatar's leader paid a visit to Hamas, this latest war began. Like so many conflicts with terrorist groups, it isn't about any specific domestic objective. The objectives are regional and now international. Egypt's Muslim Brotherhood regime is looking shaky and the Gaza lifeline has come at a perfect time, allowing Morsi to turn the attention of Egyptians away from the shaky economy and some dubious proposals, including early store closings, over to familiar territory denouncing Israel.
Under Iran or Egypt, Hamas is not fighting for Palestinian nationalism, which was already a fiction manufactured by Soviet propagandists looking up to prop up a Greater Syria, but to support the aims of Iranian and Egyptian domestic policy. And suddenly those aims were uncomfortably close.

Terrorist groups find sponsors the way that Renaissance artists found patrons, they show off their skills and wait for someone to come calling with money and guns.

Terrorist militias serve an ideology, but function as a business. Al Qaeda, Hamas, Fatah or any other of the many groups blanketing the region, need money and weapons to be viable. They need state sponsors and the states that sponsor them want something in return. Terrorist groups find sponsors the way that Renaissance artists found patrons, they show off their skills and wait for someone to come calling with money and guns. And then they perform for their patrons.
Israel's terrorist problem is unsolvable through any form of peace negotiations because there will always be sponsors. A terrorist group may sign a peace agreement, but then it quickly gets on the phone to its sponsors to assure them that it will go on committing acts of terror. Its militias are spun off into "separatist" or "splinter" groups that go on doing what they did before. And the group then asks its new friend American and Israeli friends for guns and money to fight these extremists. That way the terrorist groups get twice the money for terrorism and a farce of counter-terrorism.
Even if a terrorist leader is sincere, his movement is nothing but an umbrella group for terrorist militias. If the umbrella group stops funneling money from state sponsors to local militias, the militias go into business for themselves. And there is such a demand by sponsors for more and more "extreme" militias, that even the existing terrorist groups find themselves having to compete with newer and more violently Islamist militias.
Peace is useless and hopeless under these conditions. Fatah claimed that it could not control Hamas. Hamas claims it cannot control the men shooting rockets out of Gaza. The people shooting rockets out of Gaza will claim that they cannot control their fingers on the trigger. It's plausible deniability all the way down when it's convenient, but the real control is in the hands of regional regimes who feed coins into the slot and get out terrorism.
So what then is Israel fighting for? Peace with security. Which means slapping down Hamas hard enough that it will have to wait another 3-4 years before trying the same thing again, this time with bigger and better rockets. That was the policy six years ago and it's the policy today.
Israel will bomb Hamas targets, kill some of its senior leaders and destroy some of its weapons stockpiles. Its soldiers will enter Gaza, arrest some more senior leaders, walk into traps that will kill some of its best and brightest, and then withdraw again while Hamas celebrates its victory in the Battle of XX or YY where five or six Israeli soldiers were killed, along with ten or fifteen Hamas terrorists. And then the Battle of XX will become the Massacre of XX and lead to a documentary that will be doing an extended tour of American and Canadian campuses during the next Israeli Apartheid Week.
This is the status quo and it cannot be maintained indefinitely. The air raid sirens going off in Tel Aviv and Jerusalem warn that the war is heading into unsustainable territory. As Iran goes nuclear, Hizbullah is trying to become another Iran and Hamas is trying to become another Hizbullah. It is not a nuisance that can be ignored. Israel has no answer to the growing threat except to try and contain it through the same old methods that have now put Jerusalem and Tel Aviv into the line of fire...
...Israel has tried negotiating its way out of the terrorist trap. It has not tried fighting its way out. Israel has tried to escape the occupation, but in a region where you are either the occupier or the occupied, it may have no choice. 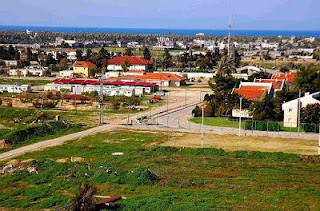 Any moment of truth must begin and end with a realistic assessment of the realities that you face. Israel faces a proxy war by its neighbors and like most proxy wars, it is the opening round to a true war ending in true occupation and genocide.
Its neighbors know what they are fighting for. They are fighting Israel for the same reason that Shiites fight Sunnis and that Sunnis persecute Christians. They are fighting Israel because "by virtue of its being Jewish and of having a Jewish population" it is different and must be crushed for the national and religious aims of any proper Islamist country.
But what is Israel fighting for?
Like so many modern countries it is fighting so as not to fight. It is fighting for peace. It is fighting to escape from fighting. And so like many modern countries it cannot bring itself to fight hard enough to break the cycle. Instead it fights just hard enough to defer the fight by another few years and the cycle continues.
Israel can retake Gaza once. Or it can retake Gaza every few years. It can have soldiers patrol Gaza or it can have rockets falling on Tel Aviv and Jerusalem. The options are as unfortunate as they are clear. The only hope for peace lies in driving out the terrorist militias who have turned Gaza and the West Bank into their own Somalia and Afghanistan and reclaiming the territory. Because after this fight is through, the next generation of rockets will go on being built and smuggled. And they will not fall in empty fields.
There can be farms and greenhouses on the hilltops of Gaza. Or there can be rockets.
Posted by Steve Lieblich at 8:40 am