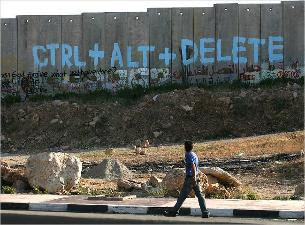 photo by Rina Castelnuovo for The New York Times

The wall that separates the G.ho.st office in Ramallah from its office in the central Israeli town of Modiin.

RAMALLAH, West Bank - Nibbling doughnuts and wrestling with computer code, the workers at G.ho.st, an Internet start-up here, are holding their weekly staff meeting - with colleagues on the other side of the Israeli-Palestinian divide.

They trade ideas through a video hookup that connects the West Bank office with one in Israel in the first joint technology venture of its kind between Israelis and Palestinians.

"Start with the optimistic parts, Mustafa," Gilad Parann-Nissany, an Israeli who is vice president for research and development, jokes with a Palestinian colleague who is giving a progress report. Both conference rooms break into laughter.

The goal of G.ho.st is not as lofty as peace, although its founders and employees do hope to encourage it. Instead G.ho.st wants to give users a free, Web-based virtual computer that lets them access their desktop and files from any computer with an Internet connection. G.ho.st, pronounced "ghost," is short for Global Hosted Operating System.

"Ghosts go through walls," said Zvi Schreiber, the company's British-born Israeli chief executive, by way of explanation. A test version of the service is available now, and an official introduction is scheduled for Halloween.

The Palestinian office in Ramallah, with about 35 software developers, is responsible for most of the research and programming. A smaller Israeli team works about 13 miles away in the central Israeli town of Modiin.

The stretch of road separating the offices is broken up by checkpoints, watch towers and a barrier made of chain-link fence and, in some areas, soaring concrete walls, built by Israel with the stated goal of preventing the entry of Palestinian suicide bombers.

Palestinian employees need permits from the Israeli army to enter Israel and attend meetings in Modiin, and Israelis are forbidden by their own government from entering Palestinian cities.

When permits cannot be arranged but meetings in person are necessary, colleagues gather at a rundown coffee shop on a desert road frequented by camels and Bedouin shepherds near Jericho, an area legally open to both sides.

Dr. Schreiber, an entrepreneur who has already built and sold two other start-ups, said he wanted to create G.ho.st after seeing the power of software running on the Web. He said he thought it was time to merge his technological and commercial ambitions with his social ones and create a business with Palestinians.

"I felt the ultimate goal was to offer every human being a computing environment which is free, and which is not tied to any physical hardware but exists on the Web," he said. The idea, he said, was to create a home for all of a user's online files and storage in the form of a virtual PC.

Instead of creating its own Web-based software, the company taps into existing services like Google Docs, Zoho and Flickr and integrates them into a single online computing system.

G.ho.st also has a philanthropic component: a foundation that aims to establish community computer centers in Ramallah and in mixed Jewish-Arab towns in Israel. The foundation is headed by Noa Rothman, the granddaughter of Yitzhak Rabin, the Israeli prime minister slain in 1995.

"It's the first time I met Palestinians of my generation face to face," said Ms. Rothman, 31, of her work with G.ho.st. She said she was moved by how easily everyone got along. "It shows how on the people-to-people level you can really get things done."

Investors have put $2.5 million into the company so far, a modest amount. Employing Palestinians means the money goes farther; salaries for Palestinian programmers are about a third of what they are in Israel.

But Dr. Schreiber, who initially teamed up with Tareq Maayah, a Palestinian businessman, to start the Ramallah office, insists this is not just another example of outsourcing.

"We are one team, employed by the same company, and everyone has shares in the company," he said.

At G.ho.st's offices in Ramallah, in a stone-faced building with black reflective glass perched on a hill in the city's business district, employees say they feel part of an intensive group effort to create something groundbreaking. Among them are top young Palestinian programmers and engineers, recruited in some cases directly from universities.

The chance to gain experience in creating a product for the international market - a first for the small Palestinian technology community - means politics take a backseat to business, said Yusef Ghandour, a project manager.

"It's good we are learning from the Israeli side now," Mr. Ghandour said. The Israelis, he said, "are open to the external world, and there is lots of venture capital investment in Israel, and now we are bringing that to Palestine."

The departure of educated young people mostly to neighboring Jordan and the Persian Gulf states is a major problem for the Palestinian economy and has been especially damaging to its technology industry. Since the Oslo peace process broke down in 2000, a wave of Israeli-Palestinian business ties have crumbled as well.

Political tensions make it somewhat unpopular for Palestinians to do business with Israelis, said Ala Alaeddin, chairman of the Palestinian Information Technology Association. He said the concept of a technology joint venture across the divide was unheard-of until G.ho.st opened its doors. A handful of Palestinian tech companies handle outsourced work for Israeli companies, but most focus on the local or Middle Eastern market.

"It's much easier to have outsourcing than a partnership," Mr. Alaeddin said. "A joint venture is a long-term commitment, and you need both sides to be really confident that this kind of agreement will work."

Benchmark Capital, a Silicon Valley venture capital firm with offices in Israel, invested $2 million in G.ho.st. Michael Eisenberg, a general partner at the firm, said Benchmark was "in the business of risky investments," but that G.ho.st presented entirely new territory.

Recalling his discussions with Dr. Schreiber, Mr. Eisenberg said: "Frankly, when he first told me about it I thought it was ambitious, maybe overly ambitious. But Zvi is a remarkable entrepreneur, and I started to feel he could actually pull this off."

The video hookup runs continuously between the offices. Chatting in the Ramallah conference room, two Palestinian programmers wave hello to Israeli colleagues conferring over a laptop in the Modiin office.

"We are doing something across cultures and across two sides of a tough conflict," Dr. Schreiber said. "I was prepared for the possibility that it might be difficult, but it hasn't been."
Posted by Steve Lieblich at 1:02 pm