A world without Israel

As preparations for the American peace conference continue, the leaders of the Palestinian Authority have announced their demands for a future Palestinian state with an area of 6205 square kilometers. This would include the Gaza strip, the West Bank and East Jerusalem. However, the message they have conveyed to their people for years, and continue to convey on the eve of the conference, is that "Palestine" exists and it replaces all of Israel.

A clip broadcast by Fatah-controlled Palestinian television this week shows a map in which Israel is painted in the colors of the Palestinian flag, symbolizing Israel turned into a Palestinian state. 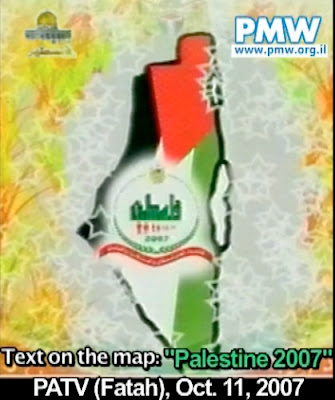 The description of all the state of Israel as "Palestine" is not coincidental and is part of a formal educational approach throughout the Palestinian Authority. This uniform message of a world without Israel is repeated in school books, children's programs, crossword puzzles, video clips, formal symbols, school and street names, etc. The picture painted for the Palestinian population, both verbally and visually, is of a world without Israel.
Posted by Steve Lieblich at 3:19 pm