Austria has had some bad press in the past. In 1986 President Kurt Waldheim’s Nazi past was revealed, in the late 1990s a number of prominent museums refused to return paintings to the Jewish families who had originally owned them, in 2000 the extreme-right Freedom Party was admitted into the coalition government. 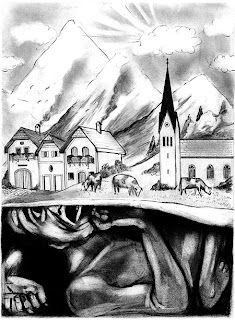 
A year ago Natascha Kampusch emerged from eight years’ in a basement cell in the Viennese suburb of Strasshof, Lower Austria.

And now Josef Fritzl is accused of imprisoning his daughter Elisabeth in a basement dungeon for 24 years and fathering seven children by incestuous rapes of her in the Lower Austrian town of Amstetten.

Many people are now asking why these two such similar crimes occurred in the same area. One of the victims, Natascha Kampusch told the BBC's Newsnight program that Austria's Nazi past might have played some role. "I think (abuse) exists worldwide, but I think it's also a ramification of the Second World War and its connection to education and so on," she said.

When I heard about these crimes, I was, of course horrified, but from what I know of Austria, I was not surprised. When I checked the map for the locations of these crimes, my feelings were vindicated.

Only 20km from the town where Josef Fritzl allegedly locked his daughter in a basement dungeon for the last 24 years, is the site where my father, Yisrael (‘Srulec’) Ben Zvy Lieblich (z”l) together with tens of thousands of other Nazi prisoners were interred 65 years ago in a massive 50.000 m2 dungeon code-named Bergkristall, a top secret Nazi underground Messerschmitt (aircraft) factory. Constructed by prisoners of the KL Gusen II concentration camp within the Mauthausen-Gusen complex, it became one of the most horrific concentration camp sites in European history due to its high mortality (up to 98% - average survival period 4 months). 20,000 prisoners died in that dungeon.

The secrecy surrounding that massive dungeon was hermetic. Even the test pilots didn't know where the planes had been constructed. But all the residents of the pretty alpine villages of Langenstein and St. Georgen an der Gusen certainly knew...

Nearby, a smaller (12.000 m2) underground installation code-named Kellerbau was another dungeon factory for the production of machine guns for Steyr-Daimler-Puch. A few km south, at Ebensee, at the southern tip of Lake Traun, was another dungeon factory for the Nazi "secret weapon", the V2 rocket, where another 20,000 prisoners were worked to death.

Austria was not "Hitler's first victim" as many Austrians still ridiculously claim. It was his birthplace, his home and his refuge. It was to the Austrian Alps that he retired with his closest, most trusted henchmen to enjoy the "good life". The Mauthausen Camp was first established to quarry the granite with which Hitler planned to build his grand palaces - the "Eagles Nest" from where he would rule the world.

When the war turned against him, and the Allies closed in from the West while the Communists closed in from the East, it was in Austria that Hitler built his Alpine fortress; his most strategic armaments factories; and barracks for his elite forces that would turn the tide against the enemies of the "thousand-year Reich".

All this was done with the active, even enthusiastic collaboration of the local populations of the picturesque hamlets and villages scattered throughout the Alps. It is my impression that the conspiracy of secrecy that Hitler established there has yet to be exorcised; that many, if not most Austrians prefer to hide their demons (and secretly nurture them) rather than bring them out into the light of day and dispatch them once and for all, as most Germans have done or are doing. 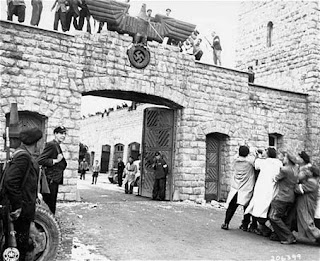 Liberation of the Mauthausen Concentration Camp May 1945. 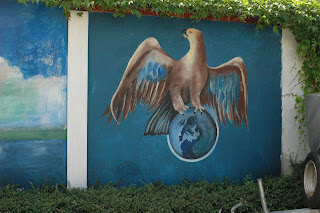 Mural in a car park near the site of the Mauthausen Concentration Camp, July 2007


Today, the history of the Mauthausen Camp complex is still largely suppressed ("buried"). The Bergkristall tunnels are on private property and inaccessible to historians and families of former prisoners. The remnants of the Gusen 1 and Gusen 2 Camps are virtually obliterated. They look like normal alpine-village housing estates, with happy playgrounds. 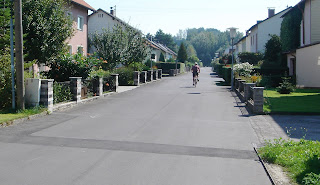 Site of the camp Gusen I is today’s Gartenstrasse, in Langenstein.
(Photo © christoph mayer chm)

In the midst of this housing stands a Museum, built on private land over the site of the Gusen 1 crematorium, and funded by survivors of the camp. Nearby a camp-prisoners' barracks still stands, now a multi-residential apartment block for people either oblivious or indifferent to the building's horrific past.

The Gusen 1 "Jourhaus" - the imposing granite gatehouse and office of the Gusen 1 camp also still stands, converted by a "creative" Austrian architect into a luxury villa that houses a family with children who play hop-scotch on the driveway. Surrounded by similar luxury houses, it would be impossible for a casual bystander to recognise this blood-drenched site for what it is. 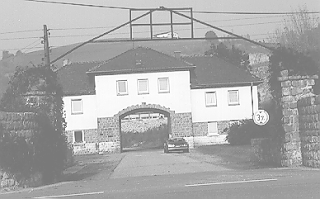 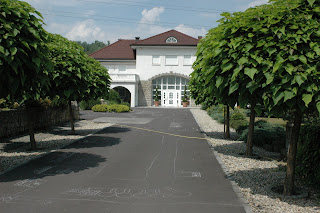 Near Mauthausen, I saw children's playground equipment built with granite blocks identical to, and probably pilfered from the nearby infamous Mauthausen quarry with its stairway of death. Austrian children today play and frolic on stones quarried by slaves who had been tormented to death by their grandparents.

And yet Alfred Gusenbauer, the chancellor of Austria, has launched a public-relations effort to salvage Austria's reputation - an enterprise akin to putting make-up on a rotting corpse. Heinz Fischer, the Austrian president, has said, “There is definitely nothing fundamentally Austrian in this case.”

Great article. The people who say there isn't anything specifically Austrian about this seem to me to be exhibiting the specific Austrian characteristic of denial. Whenever I speak to anyone intelligent (and who knows Austria) about this case, they say it doesn't surprise them.

Thanks for your comment "If-I-Were-Queen".
I must say that although I was horrified when these crimes were discovered, I was also not at all surprised. When I checked the locations of the crimes and found that they were in that region, this just vindicated my feelings about it...

my name is christoph tremetzberger.i was born in st. georgen/gusen 27 years ago.

since two weeks ago i didn´t know too much about gusen I,II,III and bergkristall.

all of our past has turned to mauthausen, and as the pictures pretty show, that it seems, there is no nazi past in st. georgen and gusen.

everything has turned to silence, nobody speaks about this poor past.

but now i know about the mortality of 98% in gusenII.
now i know a little bit of bergkristall, for what gusen II was created.

it is a shame to us, how we dealt with our past. and the shame goes on:
there are plans to pull down the two remaining baracks in gusen.
there are plans to change the stone pit in gusen into a waste dump.
the old kitchen barack in st.georgen was pulled down, for no reason.
there are houses built on the hills of bergkristall.
Some of the tunnels of bergkristall was filled with beton.
entries are pulled down.
it is a shame, a shame, a shame.
Prisoners of gusen bought the crematorium and offered it to us, to keep the memorial.

And if there wasn’t Martha gamma, Rudolph haundschmied and some other people of st. georgen who searched the past, talked to victims and so on, this past would be eradicated 100% of our memories.

Now we are a group of young people which wants to bring the truth in the heads of the people.