From The Australian, by Martin Chulov, Beersheba April 29, 2008:
....A bronze bust of an Australian Light Horseman was unveiled [yesterday] as the centrepiece of an Australian peace park just outside Beersheba in southern Israel, near the scene of the cavalry charge on October 31, 1917, that changed the course of World War I. 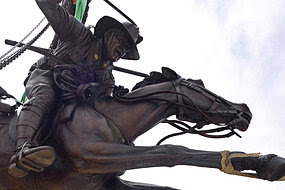 [photo courtesy of the ABC]

[Follow the link to see an ABC video about the ceremony]

[The pivotal importance of the Battle of Beersheba is not well known. On that fateful October 31, 1917, 800 soldiers of the Australian Light Horse Brigades charged the Turkish defenders with only horses and bayonets, overran them, and captured the wells of Beersheba. This famous and heroic action turned the tide of the Palestine campaign. It was only a few weeks later on 9 December 1917, that Allenby marched on to capture Jerusalem, and less than a year later, on 1 October 1918, that the 10th Light Horse regiment from WA led the Australian Mounted Division into Damascus to accept the formal surrender of the Ottoman Empire. Thus the British Government's Balfour Declaration, of November 2nd, 1917 (two days after the battle of Beersheba), was put into effect through the heroism of these ANZACs. The history of Zionism would be very different if not for this action. - SL]

The park, named the Park of the Australian Soldier, was opened by Governor-General Michael Jeffery and Israeli President Shimon Peres.

Five years in the planning, the park is an initiative of the Melbourne-based Pratt Foundation, which has worked with the City of Beersheba council in an effort to produce a facility that taps into the legacy of the Australian campaign and builds on what Mr Peres described as a bilateral relationship "without any bad weather".

Major-General Jeffery, who visited Australian troops in Afghanistan and Iraq before travelling to Israel, said: "Some 773 of the 100,000 Australians who have fallen in the defence of freedom across two world wars have fallen here."

He praised the Desert Mounted Corps, among them the 4th and 12th Light Horse that fought in the Holy Land, as being among history's finest warriors, renowned for "courage, initiative and a pervasive sense of humour".

The bronze bust of the Light Horseman was made by Australian sculptor Peter Corlett.

Up to 100 descendants of the original Light Horsemen travelled to Israel last November to re-enact the military assault of October 31, 1917, that came to be regarded as the last of the great cavalry charges.
Posted by Steve Lieblich at 8:52 am