From THE JERUSALEM POST, Apr. 23, 2008, by EFRAIM ZUROFF, Israel director of the Simon Wiesenthal Center: 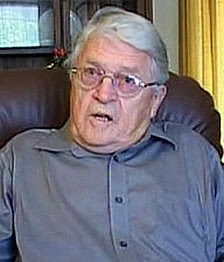 Charles Zentai
Photo: AP
In a 6-1 decision, the [Australian Supreme Court] ruled that the magistrates in Perth, where [suspected Hungarian Nazi war criminal Charles] Zentai resides, have jurisdiction to rule on the extradition request submitted by Hungary, thereby ending a legal saga that delayed Zentai's [extradition] for more than two years.
...[it is alleged that] Karoly Zentai, a Hungarian army officer serving in Budapest, apprehended an 18-year-old Jew named Peter Balasz who was not wearing the mandatory yellow star, took him to his barracks and together with two fellow officers beat him to death, and subsequently dumped his corpse in the Danube River.
After the war, Zentai's [alleged] role in the murder was revealed, but by then he had escaped to the American zone of occupied Germany. For reasons that remain unclear, a Hungarian request for his extradition was ignored, allowing Zentai to emigrate to Australia.
.... When we exposed him, Zentai denied his guilt and even expressed willingness to "go to Hungary to clear his name," but that willingness rapidly disappeared when in March 2005, Hungary issued a warrant for his arrest and asked Australia to extradite him.
... the Australian court does not address Zentai's guilt or innocence, but rather whether the Hungarian extradition request meets the local requirements for such a procedure. In theory, Zentai should have been extradited to Hungary long ago, but a technical challenge mounted by another suspect living in Perth led to a legal imbroglio that has prevented Zentai's trial for more than two years....
.... Thank God that scenario has apparently been thwarted, although the possibility still exists that the past two years of delay may ultimately spare Peter Balasz's alleged murderer his long-overdue trial ....
Posted by Steve Lieblich at 9:25 am